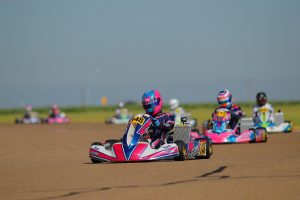 The grids are set for Sunday’s ROK Fest Amarillo Finals following a day of heat racing action in North Texas. In addition to the heat race completed on Friday, racers took to the track three more times on Saturday to race their way into a starting spot for Sunday and set the stage for the final day of activity at the Amarillo Kart Circuit.

Leading the way to the green flags on Sunday will be Ryan Norberg (ROK Senior), Liam Flanagan (ROK Mini), Liam Letzch (ROK Junior) and Cameron Egger (ROK Shifter) after finding success and being consistent in the heats. 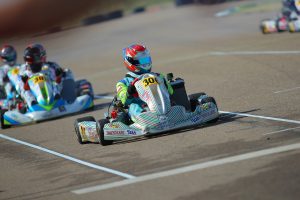 Norberg (Kosmic) nearly had a perfect run in the heat races until he was edged out by his Rolison Performance Group teammate Jacob Gulick (Kosmic) in the final flight by 0.151 seconds at the finish line. The pair will share the front row on Sunday while Filip Niemkiewicz (TonyKart) and Conrad Kraweic (TonyKart) fill in the slots on row two. Daniel Fellows (Kart Republic) and Paige Evans (Praga) will start on row three, while Scott Falcone (Kosmic) leads the way of the ROK Masters contingent.

In Mini ROK, Liam Flanagan (Praga) was en route to a zero score until the final heat race where he found himself in a little trouble. The race leader was out of lane on the start. Nonetheless, he still scored the fewest points and will lead the group to green. Sebastian Wheldon (Kosmic), Gage Korn (Formula K) and Oliver Wheldon (Kosmic) round off the four runners in the division. 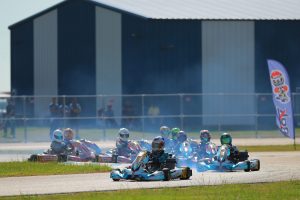 The ROK Junior division welcomed a pair of additional drivers on Saturday morning and they left their mark on the field. Branyon Tiner (Kosmic) worked his way from the rear of the grid in the morning heat race to finish second behind pole sitter Liam Letzch (FA Kart), and then hammered down heat race wins in the afternoon. Letzch and Tiner form row one and will be fun to watch on Sunday, while Macy Willian (FA Kart) will start third alongside Luke Lange (TonyKart), the other driver to join the action Saturday morning. Deanna Hoffman (Formula K) and Caleb Shrader (Kosmic) fill out row three.

ROK Shifter is shaping up to be a great showdown on Sunday between Cameron Egger (Kosmic) and Hannah Greenemeier (TonyKart). The RPG teammates were very close on Saturday, splitting the heats and while Egger had the advantage in the results, Greenemeier posted the fastest lap of each heat. Starting on the front row Sunday, these two will put their best down when it matters most. Derek Proctor (Formula K), Thane Morgan (SodiKart) and Pierce Baldus (Formula K) round of the standings of the five-driver group. 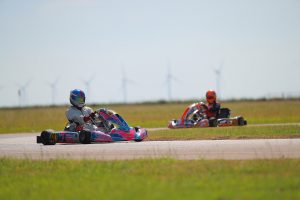 Near record high temperatures are expected in North Texas tomorrow, meaning drivers will have another factor to manage if they want to drive home with the victory trophies from the ROK Fest Amarillo and earn their tickets to ROK the RIO in Las Vegas later this year.