Saturday would see a split schedule with five classes completing their warmup and main events before the lunch break with the five others ending their weekend after. 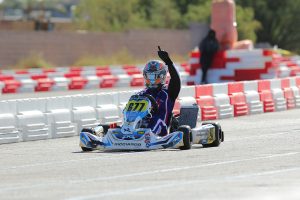 Masters ROK – Orsolon Motorsports
Beginning his final from the outside of row five, Vatche Tatikian took advantage of some close, hard racing in Masters ROK to take the win. Beginning the final lap in a distant third, contact between the two leaders in the second to last corner opened the door for Tatikian to take the lead and cruise to the finish line. The win looked as if it was going to go to either Scott Falcone or Renato Jader-David, but aggressive defending and with the shot at the championship, the two would make contact knocking Jader-David out of the race. Falcone would continue on and limp across the line for second while Danilo Ramalho rounded out the podium. Erik Jackson put himself in position to score a top-five result as he and Eric Molinatti finished fourth and fifth respectively. 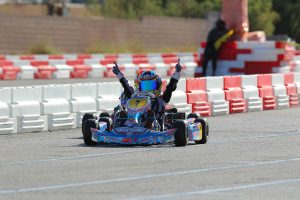 Micro ROK – ROK Cup Canada
The 18-lap Micro ROK was led early by Kai Johnson as he was able to make his way to the point getting by polesitter Enzo Vidmontiene early. Looking to pull away from the field, disaster would strike for Vidmontiene as a broken chain on lap five took him out of the race and contention for the win. Luis Umana and Jordan Dileo took over the top two spots by the midway mark but could not hold on. Kai Johnson rose to the top and is your Micro ROK Champion just ahead of Carson Weinberg in a drag race to the line. Oliver Wheldon put the Wheldon name on the podium in Las Vegas just ahead of OMP Pole Position Award winner Jordan Dileo and Graham Trammell. 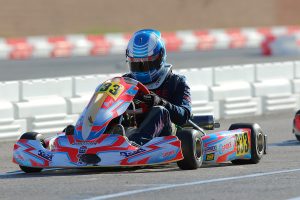 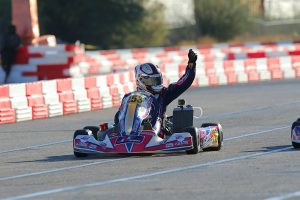 Junior ROK – AM Engines
Enrico De Luca saved the best race to take his first win of the weekend as he claimed the Junior ROK ROK the RIO Championship. Going second, second, fourth and third in the heats, De Luca beat Luca Mars in another drag race finish to claim the title. Connor Zilisch rebounded from his 17th place qualifying effort to smartly drive his way through the heat races and on to the podium in the main event. Alessandro De Tullio gained one position in the final to finish fourth just ahead of OMP Pole Position Award winner Guilherme Figueiredo. 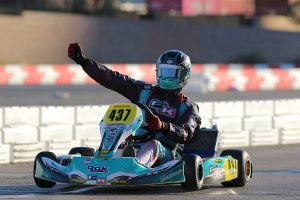 Shifter ROK – PSL Karting
A multi-kart crash at the start of the Shifter ROK main event took out the likes of Davide Greco, Jake French, Ron White, Paolo Castagnetto and Enzo Prevost as Mathias Ramirez got away clean. Holding the point for the first few circuits, Ramirez was passed by two-time OMP Pole Position Award winner Daniel Formal as the duo would wage battle yet again, similar to 2018. This time Formal would reign supreme turning his pole position from Thursday into a main event victory. Ramirez, who bent his axle early in the run, was on the point until Formal broke through on the penultimate lap for the win. Nicholas Le, Race Liberante and Kyle Wick ended their ROK the RIO in third, fourth and fifth.