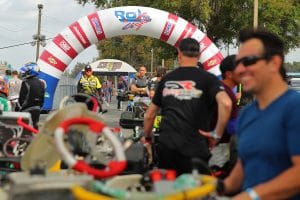 After a very successful opening round to the 2020 ROK Cup Promotions Florida Winter Tour on the temporary circuit at the Isle Casino in Pompano Beach, Florida, the elite level program returns to Ocala Gran Prix this weekend. A fixture in the Florida Winter Tour for countless years, the pristine facility and their staff greet teams and competitors with open arms for the second event of the season.

After a jam-packed unofficial practice schedule on Thursday, drivers took to the track Friday morning for two official practice session as weather moved in and through the area. With a rainy start to the day, drivers had to work through damp conditions as most chose to forgo the first round of practice, jumping straight into round two, the final on track session before qualifying.

206 Senior
In the 22-kart strong 206 Senior category, it was Collin Warren (VSR/TS Racing) that led the way taking the pole position with a lap time of 42.875 ahead of Alexander Searle (MGM). Dylan Amundsen (DP Racing) was the best of the rest crossing the line with the third quickest lap of the session a scant .008 ahead of Gianluca Savaglio (Racing Edge Motorsports) and Elmer Edmonson (MGM) who rounded out the top-five.

Dylan Amundsen improved two positions in heat one to take the win ahead of pole position winner Colin Warren. Zachary Linsell (MGM) gained four positions to end his heat in third ahead of Gianluca Savaglio, who maintained his fourth place starting position. Alexander Searle was the biggest loser of the drivers in the top-five falling three positions to finish fifth. Post-race, Savaglio was given a penalty relegating him to sixth and bringing Elmer Edmonson back to P5.

206 Junior
It was tight atop the 206 Junior time sheets after qualifying as Danny Dyszelski (Syntech) scored the pole position over Camden Gruber (MGM) by .007. Just another .014 in arrears was Mathieu Cousineau (Montreal Karting Club). Granger Perra was able to put his #51 entry in fourth scoring an outside row two starting spot for heat one while Logan Ferguson (Prime) ended his session with the fifth quickest lap.

Cousineau was on a mission in the 206 Junior heat one driving to the front of the field to take the win ahead of pole position winner Dyszelski. Granger Perra levelled up to third while Logan Ferguson followed suit to cross the line in fourth. Camden Gruber was the driver who allowed others to benefit falling three positions to finish fifth.

Master ROK
It was round one winner Renato Jader-David (Orsolon) that was back on top in ROK Masters qualifying with a blistering lap of 37.883. Rolison Performance Group’s very own Mike Rolison (RPG) was the second fastest driver of the session as Danilo Ramalho (REM) was a close third. Eduardo Magno Gaia (Zanella) solidified his position in the top-five with a fourth place effort while Californian and 2019 ROK Superfinal participant Vatche Tatikian (Phil Giebler Racing) ended his qualifying in fifth.

Jader-David continued to be the driver to beat in ROK Masters when the wheel-to-wheel action commenced taking the heat one by a commanding 2.183. Ramalho advanced forward one position as he and Rolison swapped spots to finish second and third respectively. Magno Gaia and Tatikian maintained their fourth and fifth place starting positions to finish where they started.

Dellavecchia rose to the occasion in heat one making a double pass in the final corner to take the heat race win. Johnson fell one position to cross the line in second while Wheldon leveled up one to cross third. Iliffe finished third on track but was dropped to fourth as a result of a penalty while Gianmatteo Rousseau (Team Nitro) gained four positions to finish fifth.

In the first gearbox race of the weekend, it was Jordan Musser who remained on top taking the heat one victory by a healthy 1.380. The TB Kart USA duo of Licciardi and Martinelli finished second and third, just ahead of Daniel Dibos (JC Karting) in fourth. Chris Gannon (TB Kart USA) was one of the biggest movers of the heat advancing forward five positions to finish fifth. 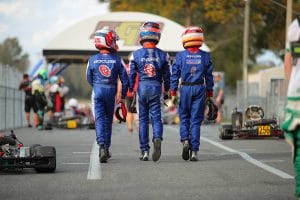 Junior 100cc / Senior 100cc
Connor Zilisch (Late Apex Racing) continued his presence at the front of the field building upon his 2020 resume by adding another pole position by outdueling Jorge Ortiz (Supertune) and Chloe Chambers (Mike Doty Racing) for the top spot. Westin Workman (Timmy Tech) claimed the outside row two starting sport with his fourth place effort while Anderson Leonard (Supertune) ended his session in fifth. Julia Boos secured the pole position in the 100cc Senior class as ahead of Jenson Altzman (Ruthless Karting). Justin White and Bill McBrayer were third and fourth ahead of Jack Drury in fifth.

Zilisch maintained his position at the front of the 100cc Junior field taking the heat one win by a large margin. As weather moved back into the area, Zilisch took advantage of the situation to win by nearly seven seconds over Dyszelski. Workman battled forward to finish third. Adam Brinkley (Brinkely Racing) ended his heat in fourth while Chambers rounded out the top-five. Julia Boos claimed top honors in the 100cc Senior division topping White by 6.708. McBrayer followed closely to finish third with Drury in fourth and Altzman in fifth after a post-race penalty.

Heat one produced rain and a bunch of on track penalties that shuffled the running order. Orjuela took the heat win, just ahead of Iliffe and Cooper Shipman (Iron Rock Raceway), who gained nine positions to finish third and was the biggest mover of the race. Pole position winner Ardiles fell three positions to end his heat in fourth while Gafrarar finished fifth.

Senior ROK
With 36 drivers in the ROK Senior class, it was an epic battle for the pole position that was eventually won by Thomas Nepveu (PSL Karting). Exiting the track with two minutes remaining in the session, the youngster sat on his time that held true, just ahead of Diego Ramos (HR Motorsports). Patrick Woods-Toth (Prime) ended his session in P3 while Ryan Norberg (Rolison Performance Group) and Luca Mars (Speed Concepts Racing) rounded out the top-five.

Fast in the dry and in the wet, Nepveu took the heat one victory ahead of Ramos as the top two drivers remained unchanged. F4 United States Championship Powered by Honda race winner Christian Brooks (Nash Motorsportz) advanced forward to finish third while Woods-Toth fell one position finishing fourth. Mars remained in the fifth position and will look to advance forward in heat two.

Junior ROK
Jack Jeffers (Speed Concepts Racing) bested the ROK Junior field to stand atop of the results sheet with a lap time of 37.369. Female driver Chloe Chambers (Mike Doty Racing) found herself in a front row starting position after qualifying in her second class of the weekend. Alessandro De Tullio (AM Racing) was the driver with the third fastest lap of the session while Carson Morgan (Supertune) and Guilherme Quinteiro (Racing Edge Motorsports) finished fourth and fifth. 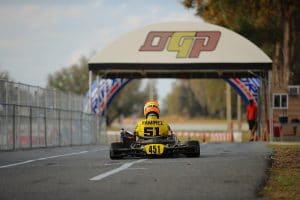 In what can only be described as a lack of time management, fifteen ROK Shifter drivers failed to make the grid as rain continued to lightly fall. Drivers panicked to switch tires and as the front of the grid left, the rear of the grid closed per the rules. Daniel Formal (ANSA Karting) took the heat race win while Andrew Bujdoso (Checkered Racing) finished just ahead of teammate Myers in third. Jimmy Cabrera crossed the line fourth while Kyle Wick (Rolison performance Group) rounded out the top-five.

With the first wheel-to-wheel action of the weekend complete, Saturday will see two additional heat races with results setting up the grid for the day’s prefinal. Stay tuned to the ROK Cup USA social media pages for more news, photos, information and results by following @ROKCupUSA on Facebook, Twitter and Instagram