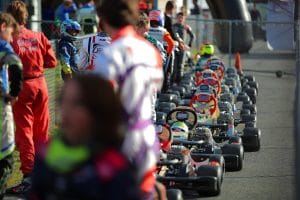 It was cool start to the day at Ocala Gran Prix but a morning sunrise for the ages had teams and competitors ready to get the day started. With a short warm-up before a day of racing, drivers competing in the second round of the ROK Cup USA Florida Winter tour would be on track four separate occasions, three of them being wheel-to-wheel action during heats two & three and the prefinal.

Warren returned to the top of the results sheets in heat three taking both heat race wins on the day. Amundsen was one again staring at the back bumper of Warren, securing another second place finish. Savaglio improved on his fourth in heat two to level up to third in heat three while Alexander Searle (MGM) finished just ahead of Linsell for fourth.

In the 206 Senior Prefinal, Warren was knocked off the top of the charts by Amundsen who had seen enough of Warren out front. Taking the win by just over two tenths, Warren finished second with Searle in a distant third as the top two broke away for a race of their own. Linsell finished fourth, 0.002 behind Searle to secure the outside row two starting spot for Sunday’s main event while Tristan Altman (Checkered Motorsports) rounded out the top-five after starting eleventh. 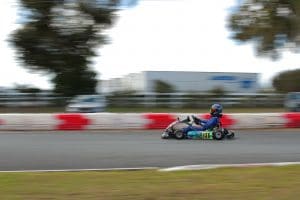 206 Junior
Mathieu Cousineau (Montreal Karting Club) found himself on top after the 206 Junior heat two checkered flag, outpacing Danny Dyszelski (Syntech) for top honors. Matthew Demarinis (Prime Power Team) put a pair of Canadians in the top-three as he finished 1.4 seconds ahead of Granger Perra (OTK) in fourth. Camden Gruber (MGM) was once again in the top-five finishing fifth.

Cousineau doubled up his wins on the day taking the 206 Junior heat two win by a scant 0.036 ahead of Dyszelski as the top two remained unchanged. Gruber worked his way forward to finish third while Logan Ferguson (Prime Power Team) made his first trip to the top-five of the day in fourth. Granger Perra continued his presence in the top-five to finish fifth.

Cousineau made it a perfect day capitalizing on his pole position starting spot to secure the prefinal win and inside position for Sunday’s main event. Ferguson found his way to the second position after the final race results were made official while Julian Dacosta (Haase USA) finished third. Dyszelski finished second on track but a driving infraction relegated him to fourth while Gruber ended his prefinal in fifth.

Master ROK
Renato Jader-David (Orsolon) continued his winning ways in Master ROK with another win in heat two. Looking like the driver to beat this weekend, Jader-David took the win by 0.622 over Daniel Ramalho (Racing Edge Motorsports) in second and Mike Rolison (Rolison Performance Group) in third. Vatche Tatikian (Phil Giebler Racing) closed his second wheel-to-wheel race of the weekend in fourth, just ahead of Eduardo Magno Gaia (Zanella Racing).

It was team owner Mike Rolison of Rolison Performance Group taking the win in heat three and showing Jader-David that he will have to battle for the win. Magno Gaia was able to maintain his positioning in the top-five and advance forward to finish second while Jader-David was relegated to third. Tatikian finished fourth again, his second fourth place result of the day while Ramalho fell to fifth. 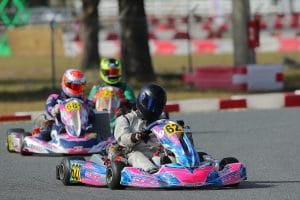 Rolison won the ROK Masters prefinal, but a start line infraction penalty relegated him to third at the end of the day. Benefiting from the penalty was Ramalho who took the prefinal win and pole position for Sunday’s main event while Jader-David was scored in second. Magno Gaia closed his day with a fourth place result while Glauber Granero (VMotorsport) improved from twelfth to finish fifth, giving himself a fighting chance in the main event.

Micro ROK
Oliver Wheldon (JC Karting) was back on top of the Micro ROK results taking the heat two win over Kai Johnson (AKT). Ilie Tristan-Crisan (PSL Karting) put his BirelART chassis in third as he finished less than two tenths of a second ahead of Salvador Dellavecchia (AM Racing) and Caleb Tarter (Nitro) after post-race penalties were assessed.

Wheldon made it two-for-two on the day winning the second Micro ROK heat as he once again beat Johnson to the checkers. Dellavecchia was able to move to P3 on the result sheet while Tristan-Crisan was fourth. Canadian Jensen Burnett (AKT Racing) made his first trip to the top-five this weekend coming home fifth.

Wheldon continued his winning ways taking the prefinal win and inside front row starting position for Sunday’s main event. Jack Ilffe (Iron Rock Raceway) made a bold last corner move to go from fourth to second while Johnson and Dellavecchia finished third and fourth. Tristan-Crisan ended the day in fifth and will work hard to be on the podium after Sunday’s main event.

Musser’s dominance continued in heat three with another win as he once again outpaced Licciardi for the win. Martinelli held station in third as the top-three remained unchanged from the heat two finishing results. Bedard ended heat three in fourth while Hernando Sanchez (Goodwood Kartways) rounded out the top-five. 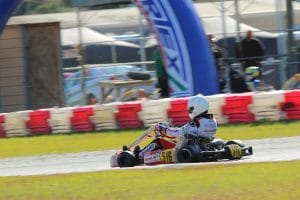 It was another 4+ second win for Musser as he once again outpaced his competition and drove to a prefinal win. Licciardi, who has finished second in every official on track session this weekend, was the bridesmaid to Musser in the prefinal but secured his familiar outside row one starting position. Three TB Kart USA drivers were back in the top-five as Martinelli finished third with Chris Gannon in fifth as they sandwiched Nicolas Bedard who ended his day with a P4.

Workman worked his way to the top of the time sheets to score the heat three win ahead of Zilisch while Ortiz ended his three heat races in third. Chambers was back in P4 and Thomas Annunziata (Team Felon) moved into the top-five in fifth. Julia Boos scored her third heat race win this weekend in the 100cc Senior class while White, Altzman, McBryer and Drury finished second through fifth.

Zilisch found his way to the front of the field in the 100cc Junior category taking the prefinal win ahead of heat three winner Workman. Ortiz maintained his heat three finishing position with a third place result in the prefinal while Chambers and Noah Baker (Supertune) finished fourth and fifth respectively. 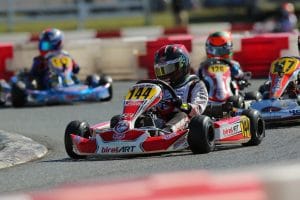 Mini ROK
Parker Delong (Syntech) found his way to the front to score the heat two Mini ROK win just ahead of round one winner Caleb Gafrarar (PSL Karting). Matias Orjuela (Parolin Factory) found his way to third as Cooper Shipman (Iron Rock Raceway) solidified his position in the top-five with a fourth place effort. Tom Shoecraft (AKT Racing) drove forward to finish fifth, just ahead of Colombian driver Salim Hanna (Team Montoya), who was one of the fastest karts on track and was able to end heat two in fifth.

Delong added his second heat race win of the day as he beat Gafrarar to the line by 0.501 while Orjuela finished third. Sebastian Wheldon (JC Karting) closed his set of heat races in fourth while Diego Ardiles (Supertune) claimed the fifth position.

Delong continued his winning ways in the Mini ROK prefinal taking the top spot just ahead of Orjuela. Oscar Iliffe(Iron Rock Raceway) finished third while Caleb Gafrarar fell to fourth and will start the main event from outside row two. Friday’s pole position winner Ardiles finished fifth and will challenge for the win tomorrow. 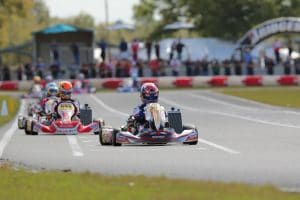 Mars rose to the top of the ROK Senior field in heat three as he moved Nepveu down to second for the first time this weekend. Andre Nicastro (NF Motorsports) advanced forward several positions to finish third just ahead of Ramos and Woods-Toth.

It was Jack Jeffers (Speed Concepts Racing) turn to be at the top of the ROK Junior results board as he turned his pole position starting spot into a heat race win. Park made it a Speed Concepts Racing one – two while Crews held on for third. Morgan was back at the pointy end of the field coming home in fourth while Chambers continued her string of consistent results in fifth. 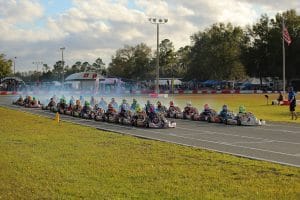 It was a disaster of a prefinal for three of the drivers in the top-ten as Carson Morgan, Jack Jeffers and Paul Bocuse (Speed Concepts Racing) all ran into trouble in the prefinal and will start the main event from the tail of the field. Connor Zilisch was the survival of the fittest to win with Jace Park crossing the stripe in second. Crews continued his top-three runs finishing third with Alessandro De Tullio (AM Racing) coming home fourth. Guillerme Figueredo ended his day in fifth.

Shifter ROK
AJ Myers (Checkered Racing) was back at the pointy end of the field in the 32-kart strong Shifter ROK class as he beat fellow Floridian Austin Garrison (TB Kart USA) to the checkers. Jimmy Cabrera (AKT Racing) finished third while Jake French (PSL Karting) solidified the fourth position. Eduardo Barrichello (PSL Karting) made his first trip to the top-five with a fifth place finish aboard the new Charles Leclerc kart.

Myers made it three for three in the Shifter ROK heat races taking home another win while Garrison was once again second. Andrew Bujdodo (Checkered Racing) elevated his position to third with French adding another fourth-place result. Cabrera ended his heats in fifth and will look to advance forward in the prefinals.

Myers was once again on a mission in the Shifter ROK prefinal crusing to a 1.5 second victory over Jimmy Cabrera, Andrew Bujdoso held second for the majority of the race but fell victim to Cabrera in the final few laps but managed to hold on to third. Daniel Formal (ASNA Motorsports) worked his way forward to finish fourth while Mathias Ramirez (GFC/Trackmagic) crept back into the mix with a fifth place result. 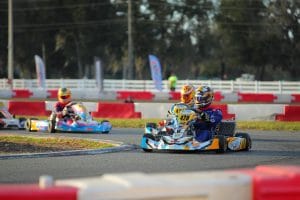 Sunday will see a split schedule and main events for all classes. Stay tuned to the ROK Cup USA social media pages for more news, photos, information and results by following @ROKCupUSA on Facebook, Twitter and Instagram