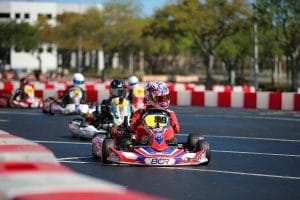 A cool but bright start to the day greeted ROKKERS at Tropicana Field for Saturday’s wheel-to-wheel competition. With heat two, three and prefinals on the docket, grids are set for Sunday’s main events and the run at the series titles. With a sun-drenched facility, the day went off without a hitch as thirty races went green without a single red flag.

The talk of the paddock was the track layout and challenges. With a newly resurfaced parking lot, bumps, transitions and barriers, drivers and teams were put through the challenge of finding the right setup and speed to move towards the front of the field.

206 Junior
Leading the way in 206 Junior heat two was that of Granger Perra (Privateer) as he was able to knock Mathieu Cousineau (Montreal Karting Club) from the top position. Julian DaCosta (Haase USA) led the second train of three across the line with Danny Dyszelski (Syntech) and Logan Ferguson (Prime Power Team) in tow.

Perra makes it two-for-two on 206 Junior heat races taking another win ahead of Cousineau. The top five drivers remained in the same finishing positions as heat one with DaCosta, Dyszelski and Ferguson finishing third, fourth and fifth.

Mathieu Cousineau returned to the top in the 206 Junior prefinal to take the win and pole position for Championship Sunday’s main event. Finishing second and lining up on the outside of row one will be Danny Dyszelski while Granger Perra finished third and will occupy row two. Logan Ferguson had his best result of the day to finish fourth with Julian DaCosta falling to P5. 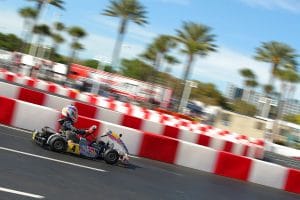 Similar to 206 Junior, the top three on the results sheets from heat two remained the same in heat three. Auriemma led the way taking a slight advantage over Coulombe as Granero finished heat three in third.

Michael Auriemma claimed the Masters ROK prefinal win and pole position for the main event. Renato Jader-David returned to the track and drove forward to finish second while Sylvain Coulombe crossed the stripe in P3.

206 Senior
Colin Warren (VLR/TS Racing) was back on top of the 206 Senior heat as he added another win to his resume. Dylan Amudsen (DP Racing) remained consistent on the weekend finishing second while Canadian Gerald Caseley (Gerald Caseley Racing) was third. Alexander Searle (MGM) and Jed Perkins (TB Kart USA) settled into fourth and fifth.

Warren remained perfect on the day adding to his heat two win with a victory in heat three. Caseley advanced forward an extra spot in the third heat to finish second, while Amundsen fell one to finish third. Perkins had his best result of the weekend advancing forward to finish fourth as Owyn Thomas (Prime Power Team) made his first trip to the top-five with a fifth-place effort.

Dylan Amundsen regained his 206 Senior advantage by scoring the prefinal victory over heat two and three winner Colin Warren. Gerald Caseley was able to hold on to P3 and inside row two starting spot for tomorrow’s main event. Alexander Searle secured the fourth position and will give himself a fighting chance for tomorrow’s win while Kelsey Hann finished fifth. 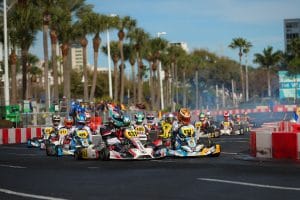 Building upon his heat two win, Oliver Wheldon secured the heat three victory to score the pole position for the day’s prefinal, this time beating Dellavecchia to the line. Asher Ochstein had another solid drive forward to put his Team Benik kart in P3 while Jensen Burnett (AKT) and Jordan DiLeo finished fourth and fifth respectively.

Wheldon made it three for three on the day adding a prefinal win to his heat race victories. Courtesy of the win, Wheldon is guaranteed an inside front row starting position for tomorrow’s main event as he will line up next to second place finisher Salvador Dellavecchia. Vicente Garcia crossed the line in the third position, just ahead of Asher Ochstein and Ilie Tristan-Crisan. 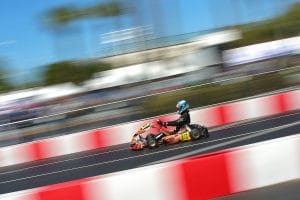 Daniel Formal was back on top in heat three as he and Bujdoso battled it out for supremacy. Taking the win by .278, Formal secured the pole position for the day’s prefinal as he and Bujdoso will aim to do it all again. Austin Garrison continued his march forward to finish third while AJ Myers held his own in fourth. Brazilian Rubens Barrichello (ANSA Motorsports) secured P5.

Biding his time all weekend long, Austin Garrison attacked in the prefinal and drove to the win. Taking advantage of certain situations and working his way by the lead duo, Garrison scored the victory and pole position for Sunday’s main event. Daniel Formal held on to second and Andrew Bujdoso finished third. The trio battled tooth and nail all race long and should be the three to fight for tomorrow’s win. AJ Myers scored the fourth position while Rory Van Der Steur finished fifth.

Looking like the driver to beat, Connor Zilisch scored the 100cc Junior heat three win by a 1.5 second margin over Thomas Annunziata. Chambers found her way to the third position on the results sheet after Workman was docked three positions for a driving in fraction and classified in sixth. Hallie Schroeder (Ruthless Karting) and Danny Dyszelski (Synergy) rounded out the top-five.

Zilisch was back on top at the end of the 100cc Junior prefinal taking another dominant victory and the main event pole position. Thomas Annunziata was able to secure the second position over the 18 lap prefinal with female driver Chole Chambers crossing the line in third. Westin Workman will start outside row two Sunday courtesy of his fourth-place finish while Sam Corry (Team Felon) finished fifth.

Senior 100cc
Justin White (Kartworkz) rose to the top of the 100cc Senior field in the second heat ahead of heat one victor Julia Boos (Team Felon). Jenson Altzman (Ruthless Karting) was the best of the rest to finish third while the Goodwood Kartways duo of Andy Miller and Ross Smith finished fourth and fifth.

It was the third Senior 100cc heat and the third different winner with Jenson Altzman taking the honors. Julia Boos finished second and courtesy of her heat races results will start on the pole position for the prefinal. Justin White secured the third position with Andy Miller and Bill McBrayer in fourth and fifth.

Altzman continued his winning ways in 100cc Senior claiming the checkered flag in the prefinal ahead of Julia Boos. Justin White was once again able to be in the top-three with a third-place effort with Ross Smith in fourth. Bill McBrayer had another consistent run to finish fifth. 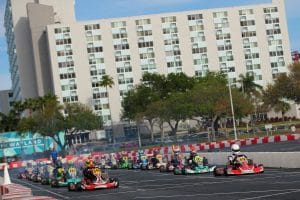 Shifter Master ROK
For the first time this Florida Winter Tour, it was not Jordan Musser leading the field to the checkered flag. Josh Lane (DRT) knocked off the eventual champion as Rene Martinelli (TB Kart USA) fell to third. Peter Licciardi (TB Kart USA) put two TB Karts in the top-five as Michael Riveria (GFC) claimed the final position in the top-five.

Musser returned to the front of the field during heat three as he made his way past Rene Martinelli just past the halfway mark to take the win. Heat two winner Josh Lane scored a second-place result with Martinelli hanging on to third. Mexican driver Victor Jimenez crossed the line in fourth and Daniel Dibos finished fifth.

Josh Lane has been the first driver all Florida Winter Tour long to defeat Jordan Musser and did so again in the Shifter Master ROK prefinal. Musser was able to hold onto second with Rene Martinelli in third as the top-three were separated by .154. Hernando Sanchez from Colombia was able to secure the fourth position on track and outside row two starting position for Sunday while Daniel Dibos was fifth.

Mini ROK
Caleb Gafrarar (PSL Karting) climbed to the top of the Vortex Mini ROK heat two taking the win and solidifying his chances for the weekend win and series championship. Parker Delong (Syntech) outpaced Sebastian Wheldon (JC Karting), who was able to maintain the position ahead of Matias Orjuela (Parolin) and Christian Quijano (Supertune).

Parker Delong rocketed his way to the top of the heat three results sheet in Mini ROK to put a heat race win on his resume. Heat one winner Gafrarar finished second with Wheldon adding another third-place result. Orjuela was back in the top-five finishing fourth as Salim Hanna (Team Montoya) from Colombia finished fifth. 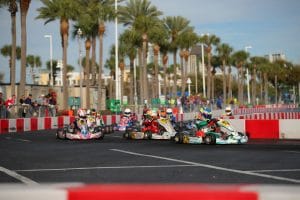 Fighting for the championship, Caleb Gafrarar took a big step forward by winning the Mini ROK prefinal. Matias Orjuela will start on the outside of the front row courtesy of his second-place result in the prefinal while Christian Quijano finished third. Parker Delong will make his bid for the win from P4 after finishing second on track but incurring a start line infraction while Diego Ardiles finished fifth.

Junior ROK
Kicking off where he left off in 100cc Junior, Connor Zilisch (Late Apex Karting) claimed his second heat race win of the day driving away from Jace Park (Speed Concepts Racing). Guilherme Figuerdo (HR Motorsports) held his position in third holding off the advances of Paul Bocuse (Speed Concepts Racing) and Chloe Chambers (Mike Doty Racing), who claimed her second top-five result of the day in as many classes.

It was an all Speed Concepts ROK Junior heat three as Jack Jeffers and Paul Bocuse claimed the top two positions. Connor Zilisch was able to finish in third with Guilherme Figueredo in fourth. Kyffin Simpson put three SCR branded drivers in the top-five finishing fifth.

After winning heat two and falling to third in heat three, it was all Zilisch in the Junior ROK prefinal taking a commanding 6.293 win courtesy of some hard on track battles behind him. Chloe Chambers was able to work her way forward to finish second with Jamaican driver Alex Powell (AKT) in third. Jeffers and Bocuse returned to the top-five finishing fourth and fifth. 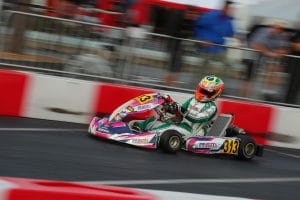 Senior ROK
Rebounding from a first corner incident in heat one yesterday, Luca Mars (Speed Concepts Racing) scored the heat two victory by a healthy margin. Driving away from the field with ease, Thomas Nepveu (PSL Karting) was classified in second after the original runner up, Diego Ramos (HR Motorsport), was given a three second penalty for a start line infraction. Axel Cabrera (AKT) slotted himself into P3 while Ramos and Brandon Jarsocrack (Team Felon) rounded out the top-five.

Luca Mars made it two-for-two on the day taking the heat three win, 1.138 ahead of Diego Ramos. Brandon Jarsocrak improved from fifth in heat two to third in heat three while Aaron Benoit (U-Race) finished fourth. Colin Warren was back in the top-five after a disappointing heat earlier in the day.

After running close to the front but not at the front throughout the day, Diego Ramos broke through in the prefinal to take the ROK Senior win. Brandon Jarsocrak had his best result of the weekend with a strong drive to second while Luca Mars will start Championship Sunday from third. Thomas Nepveu put three different nationality drivers in the top four with Axel Cabrera in fifth.

Championship Sunday will see a split schedule and main events for all classes. Stay tuned to the ROK Cup USA social media pages for more news, photos, information and results by following @ROKCupUSA on Facebook, Twitter and Instagram.