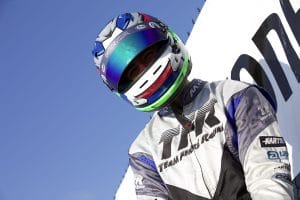 It is ROK Cup USA’s first visit to the famed Charlotte Motor Speedway as ROKKERS were greeted with open arms by facility staff. A quick and easy COVID-19 screening process moved everyone through the gates with ease as Friday would get underway with three practice sessions per class before timed qualifying and the first wheel-to-wheel action of the weekend. With temperatures in the mid-90s and the humidity pushing the feels-like temperature over 100F, the on-track action was beginning to heat up as competitors race for ROK the RIO tickets, ROK Cup SuperFinal invites and the title of ROK Fest East Champion.

Qualifying and Heat One 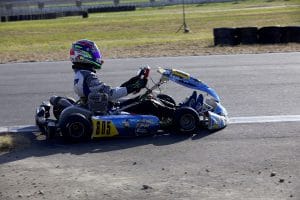 100cc Junior / Senior
It was Thomas Annunziata (Team Ferris / Team Felon) that scored the 100cc Junior pole position as he only needed eight laps to get the job done. Taking the top spot by .163 over Adam Brickley (Team Fullerton), Annunziata and Brickley will lead the field to the green flag in heat one. Third quickest driver on track was 100cc Senior driver Brooke Nachtmann (Squizzi Squadre Corse) as she was just over three tenths of a second ahead of 100cc Junior drivers Beckham Jacir (JC Karting) and Logan Vajda (Kartworkz).

Annunziata completed a perfect day taking the heat race win in dominating fashion claiming the fastest lap of the race and the win by 8.332. Beckham Jacir was second as he and Adam Brickley had a good battle going until a broken bumper just before the halfway mark sent Brickley to the pits. Nachtmann was able to cross the line in third taking the 100cc Senior win ahead of Logan Vajda and Brickley who was classified fifth.

Micro ROK
AKT Racing driver Isaac Malcuit put his Energy kart on the pole position as Asher Ochstein (Team Benik) completed the front row. The top two drivers were in a class of their own as Keelan Harvick, son of NASCAR driver Kevin Harvick (Nitro), led the rest of the field in P3. Max Cristea (DCT) slotted himself in fourth with Matteo Franco-Ruggiero in fifth. 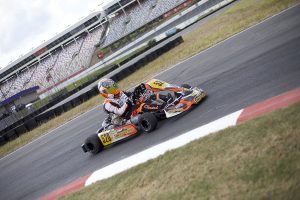 Malcuit went on to take the heat one win as the top five qualifiers remained static throughout the race to finish where they started. Malcuit took the win ahead of Ochstein as Harvick, Cristea and Franco-Ruggiero finished third, fourth and fifth respectively.

Shifter Master ROK
Nathan Stewart (Full Gas Motorsports) took the top spot in ROK Shifter Master qualifying with a lap of 40.858, .118 ahead of Kyle Apuzzo (GFC). Michael Rivera (Rivera Racing) slotted himself into the third position as he outpaced Rod Clinard (CRG Nordam) and Daniel Dibos (Ansa Motorsports), who finished fourth and fifth respectively. Following the session, Rivera’s time was removed due to track width limits elevating both Clinard and Dibos to third and fourth and Matt Machiko (Timmy Tech) to fifth.

It was an intense Shifter Masters heat one with the top four drivers finishing within .716 of one another as Stewart converted his pole position into a heat race win. Apuzzo was able to maintain his second place starting spot to finish second at the checkered while Clinard and Dibos were third and fourth respectively. Rivera rebounded from his qualifying DQ to move forward three positions to finish fifth and scored the fastest lap of the heat. 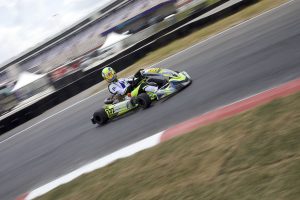 Senior ROK / Master ROK
Thomas Nepveu (PSL Karting) put his BirelART at the front of the field in the ROK Senior class with a lap of 40.423, a scant .022 ahead of Liam Letzsch (Christian Bird Motorsports). In a tightly contested session, Axel Cabrera (AKT/KDM) was third and will start inside row three for heat one as Justin White (Kartworkz) will start to his right side in fourth. Female driver Chloe Chambers (TB Kart USA) was the fifth fastest driver and pushed herself to the fifth fastest time.

Letzsch shocked the Senior ROK field getting around Nepveu with two laps remaining to take the heat one win and the fastest lap of the race. Nepveu was able hold the second position just ahead of Cabrera in third. Chambers moved forward from her fifth place starting position to finish fourth while Jenson Altzman (Ruthless Karting) moved from seventh to fifth and will start heat two from inside row three. 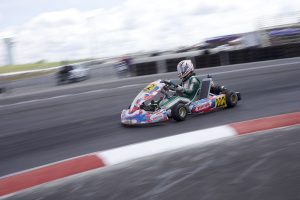 Junior ROK
Similar to the Senior ROK qualifying results, the times were close at the front of the field as Westin Workman (Timmy Tech) edged Jeremy Fletcher (Team Benik) by a slim margin of .021 to steal the pole position. Thomas Annunziata (Team Ferris / Team Felon) ended his qualifying session in third as Frankie Iadevaia (Rivera Racing) and Deanna Hoffman (Christian Bird Motorsports) rounded out the top-five.

Pole position winner Workman went from first to fifth on the start and spent the majority of the race playing catch up. Fletcher moved by Annunziata entering turn three on the opening lap and never looked back to take the heat one win. Annunziata held on to come home second as Workman worked his way back to third. Iadevaia put his GFC Kart in the fourth position as Jacob Gerke (AKT Racing) was classified in fifth. 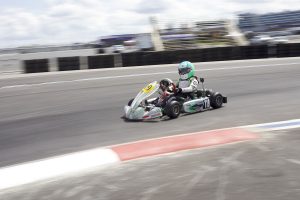 Mini ROK
Parker Delong (Ruthless Karting) was the man at the front of the field in the Mini ROK class scoring the pole position and inside front row starting spot for heat one. Kai Johnson (AKT) was the best of the rest in P2 .178 behind Delong while Gage Korn (Christian Bird Motorsports) was third. Salim Hanna (Team Montoya) was the fourth fastest driver of the session as Florida Winter Tour Mini ROK champion Caleb Gafrarar (PSL Karting) was fifth.

Gafrarar proved why he is a champion as he drove to second on the opening lap and took the lead later in the race to score the heat one win. Pole position winner Delong moved by Sebastian Wheldon (JC Karting) on the final lap to take second with Wheldon crossing the line in third. Salim Hannah maintained his starting position to finish fourth while Johnson dropped three positions to finish fifth.

Shifter ROK
It was BirelART driver Jake French (PSL Karting) garnering the pole position in Shifter ROK qualifying, completing a lap of 40.222. It was a dead heat for the second fastest lap of 40.290 between Andrew Bujdoso (Magik Kart USA) and Daniel Formal (Ansa Motorsports), with Formal being awarded the position based on the second fastest lap. Bujdoso will line up inside row two alongside Rory Van-Der-Steur (Magik Kart USA) and just ahead of the fifth-place qualifier of Michael Stevens (PSL Karting). 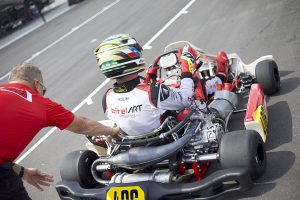 Formal would get the jump at the drop of the green flag as he took the lead ahead of polesitter French. French would get by Formal with an aggressive move only a few laps into the race to regain the top spot and never look back. Taking the heat race win by 1.166, French beat Formal to the checkered flag while Bujdoso finished third. Vincenzo Sarracino (PSL Karting) advanced forward four positions to finish fourth while Jason Henrique (Rivera Racing) gained two positions to finish fifth.

Saturday all teams and drivers will see a morning warmup before three heat races that will set the grid for Sunday’s ROK Fest East main events.