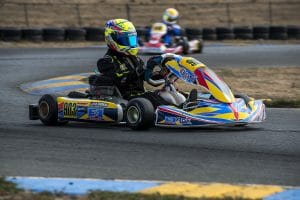 It was another picture-perfect day in Wine Country as ROKKERS hit the track for two practice sessions in the morning before qualifying and heat one went green in the afternoon. With the ROK Shifter class highlighting the schedule, the gearbox category was the last to hit the track and did not disappoint. With progressive heat races throughout the weekend, every lap and every position counts.

Qualifying and Heat One

Junior 100cc
It was all Jacob Hoover (Alex Keyes Racing) in 100cc Junior qualifying as he scored the pole position .502 over Preston Lambert (Cambrian GoKarts). Stephen Eisert (Leading Edge Motorsports) managed to clock the third quickest lap of the session while Graham Trammel (Rolison Performance Group) was fourth with the second through fourth place competitors being separated by a mere .57. Christian Cameron (Cameron Karting) will line up inside row three for heat one.

Hoover maintained his position at the front of the field as he proved his qualifying speed was no fluke driving to a 3.197 victory. Chase Hand (Joey Hand Racing) rocketed forward to grab the second position taking advantage of others’ misfortunes while Jack Scrady (Nevada Kartsport) finished third. Eisert was able to hold onto a top-five result with a fourth-place finish while Cameron was able to cross the line in fifth.

Senior 100cc
Alex Keyes Racing scored their second pole position of the day in the 100cc Senior class as Kyriakos Sioukas was the quickest driver of the session and will line up on the inside of the front row. Michael Avansino (Avansino Racing) slotted himself into the second position with Joey Brienza (Nash Motorsportz) in third. Nolan Allison (Rolison Performance Group) put his Kosmic chassis in the fourth position while perennial front-runner Oliver Calvo (Leading Edge Motorsports) rounded out the top-five. 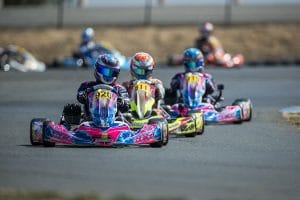 Master 100cc
Carlos Calderon (Aluminos) claimed the 100cc Masters pole position with a lap of 54.049, more than two tenths ahead of his competition. Billy Cleavelin (Rolison Performance Group) was the second fastest driver of the session and will begin his quest for a race win from the outside of row two. Pat Beckley (SpeedSense Motorsports) was third with Stephan Gaudreau (Aluminos) and Brett Harrelson (Nash Motosportz) in fifth.

Carlos Calderon continued his front of the field presence taking the Master 100cc heat one victory by 1.143 over Cleavlin. Beckley crossed the line in P3 maintaining the front three positions from qualifying until the end of heat one. Brett Harrelson (Nash Motorsportz) put his OTK chassis in the fourth position while Ivan Lvov was fifth and will start heat two from inside row three. Following the race, Harrelson received a penalty for contact elevating Stephan Gaudreau to a fifth-place finish. 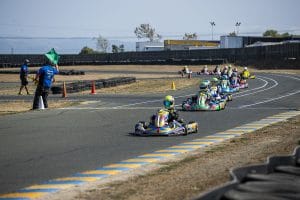 It was all Andruss in the first Micro ROK heat as he led from flag-to-flag to take a commanding win for himself and his new GFC program. Calderon would be classified in the second position while Hodge ended his day with a third-place result. Shobert was the lone competitor in the Mini ROK class and completed the full race distance to take the win.

Kevin Woods turned the fastest lap of heat one as he slowly drew away from second place runner Joseph. Woods scored the win to go along with his pole position run earlier in the day while Joseph crossed the line in second. O’Neill solidified his position in third while Yop maintained his fourth place starting position to finish fourth. Nathan Stewart (Full Gas Motorsports) closed his first wheel-to-wheel action in fifth.

Senior ROK
It was a Rolison Performance Group show in ROK Senior qualifying as they swept the top four positions led by Jace Denmark-Gessel. Ryan Norberg finished .035 in arrears of Denmark-Gessel with Jonathon Portz crossing the stripe third. Michael Michoff will start his quest for the ROK Fest West victory from outside row two while Liam Letzsch (Christian Bird Motorsports) was the first non-RPG driver in fifth. 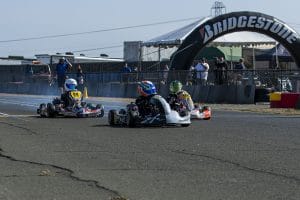 Norberg returned to his familiar position at the front of the field and secured his first heat race win of the weekend and also claimed the pole position for heat two tomorrow. Norberg grabbed the victory by .052 over pole position winner Denmark-Gessel. RPG drivers continued their domination of the class taking the top four positions with Portz in third and Michoff in fourth. Oliver Calvo (Leading Edge Motorsports) advanced forward from his qualifying position to finish fifth.

It was a Le Duc and Cleavelin battle at the front of the field in the first heat for the Master ROK class with Cleavlin getting the best of the duo. Taking the heat win, Cleavlin solidified his pole position starting spot for heat two tomorrow while Le Duc crossed the line in second. Gaspar, Morte and Arul Venkatesh (Cameron Karting) rounded out the top-five. Following a post-race penalty, Venkatesh was dropped to P7 while Chad Wallace levelled up to fifth.

Shifter ROK
It was a tight qualifying session in Shifter ROK with the front five drivers separated by a scant .119. On track, Aidan O’Neill (Ron White Racing) garnered the pole position with a lap of 48.204. Hunter Pickett (GFC / Pickett Racing) clocked the second fastest time of the session while Cole Shade (Squadre Trackmagic / GFC) was third. William Ferguson (SpeedSense Motorsports) was the fourth fastest driver in the twenty-five-kart field with Ron White (Ron White Racing) fifth. 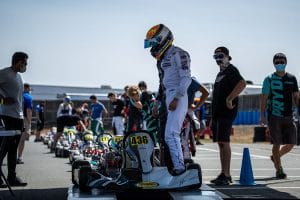 Pickett was able to drive to the front of the field once racing began and took the heat one win over a stout field of competitors. An intense three kart battle for the second position ensued all race long with Nic Le Duc (The Karting Collective) getting the best of the rest in P2. Aidan O’Neill led the trio of Ron White Racing drivers to finish third while White himself finished fourth just ahead of Brian Keck.

Saturday all teams and drivers will see a morning warmup before three heat races that will set the grid for Sunday’s ROK Fest West main events.