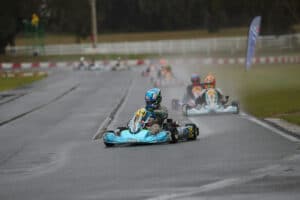 After a great day of unofficial practice on Thursday with temperatures in the mid-80s, 185 ROKKERs and their teams returned to the Ocala Gran Prix on Friday and were greeted with rain. As heavy downpours fell through the early morning hours up until practice began, the weather would subside until a second cell rolled through early in the afternoon. With drivers taking their time to get started, most competitors hit the track for the second round of practice with qualifying and heat one taking place later in the day. It was a full day of wet competition as not one LeVanto slick tire went on track making it truly a wet day of racing action.

Nash Motorsports VLR Senior and Utah Motorsports Campus VLR Master
It was a combined VLR Senior and VLR Master qualifying session as relatively light rain picked up as the session went on. With lap times consistently getting slower for most drivers as the session ran on, it was Blake Nash (Nash Motorsportz) who took the VLR Senior pole position with an impressive lap time of 44.940. Cole Schroeder (Syntech) was more than half a second in arrears while Jed Perkins (Margay) was third in class. Grace Hemmerde (Crosslink) secured the fourth quickest time in VLR Senior while Lucas Fecury (Piquet Sports) was fifth. In the VLR Master category Christian Vomir (Tecno Kart USA) was your pole position winner with Franciso Marques (Orsolon Racing) claiming the second fastest time of the session. Laurentiu Mardan (Tecno Kart USA) scored the third quickest time of the session with David Morris (Nadie) and Juan Basco (SLA Kart) rounding out the top-five.

Nash turned his pole position effort into a race winning performance in heat one taking a commanding win over Schroeder. Perkins was third to cross the stripe in VLR Senior with Fecury ending his day with a fourth-place result and Hallie Schroeder (Syntech) in fifth. Christian Vomir topped the charts in VLR Masters earning the win ahead of Marques, Mardan, Basco and Morris. 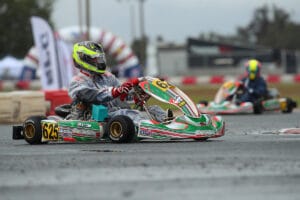 REM VLR Junior
Round one victor Paul Bocuse (Speed Concepts Racing) scored the fourth fastest lap in VLR Junior qualifying as he was out done by pole position winner Chase Hand (Rolison Performance Group), Sebastian Wheldon (JC Karting) and Beckham Jacir (JC Karting). Hand dominated the session going faster almost every lap to earn the top spot by .501 ahead of Wheldon. Danny Dyszelski (Ryan Perry Motorsports) rounded out the top-five and will start heat one from inside row three.

Chase Hand led from corner one to the checkered flag as he was able to go around the outside to earn the win. Bocuse gained two positions in the wheel-to-wheel action to score a second-place finish while Speed Concepts Racing’s Ingratta gained six positions to finish third. Dyszelski was also able to move forward to finish fourth while Jacob Lauter (REM) finished fifth.

Leading Edge Motorsports Mini ROK
It was a ten-minute qualifying session for the Mini ROK competitors that was led by Team Benik’s Enzo Vidmontiene as he secured the round two pole position. As the tallest driver in the field, Vidmontiene was able to generate more grip than others to turn a lap time of 47.104. Sebastian Garzon (Orsolon Motorsports) was the best of the rest in second as he outpaced Oliver Wheldon (JC Karting) for P2. Diego Ardiles (Supertune) was fourth overall in qualifying as he pipped Salvador Della Vecchia (San Antonio Racing).

Vidmontiene scored the heat one victory to keep his perfect weekend going as he outpaced Ardiles, who scored the fastest lap of the race, for the win. Kai Johnson (AKT Racing) advanced forward to cross the line in third while Garzon fell two positions to finish fourth. Della Vecchia maintained his position in P5. 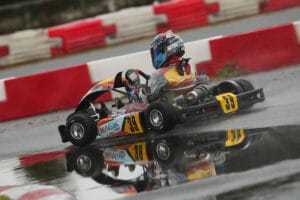 ANSA Motorsports Master Shifter ROK
Rain continued to fall for the first gearbox class for qualifying as the Masters Shifter ROK was paced by round one podium winner and TB Kart USA’s Rene Martinelli. Victor Jimenez (Rolison Performance Group) was able to secure the off pole starting position as he beat Farshad Bagheri who put two TB Karts in the top-three. Round one winner Jordan Musser (PSL Karting) claimed his stake in the top-five with a fourth-place effort just ahead of Luis Sanchez (ANSA Karting).

Martinelli continued his wet weather prowess in heat one claiming the race win for TB Kart USA. Musser was able to climb two positions to put his BirelART in the second position ahead of Licciardi, who climbed four to finish third. Bagheri put three TB Karts in the top-four crossing the line in P4 as Patrick Otto Madsen (ANSA Karting) leveled up four positions to finish his day with a fifth-place finish.

It was a hairy start in Senior ROK as the outside row was not able to get a good jump and caused some issues. Norberg was able to get into the lead early but was chased, stalked and eventually passed by pole position winner Connor Zilisch. Zilisch drove to the win ahead of Justin White, who scored the fastest lap of the heat. Thomas Annunziata (Mike Doty Racing) was able to gain six to finish third with Norberg ending his heat in fourth, just ahead of Diego Ramos (REM) in fifth.

Orsolon Racing Master ROK
It was all Orsolon Racing in Master ROK as Magno Gaia and Renato Jader secured the top two positions for the Florida based program. Securing the pole by .198, Magno was the man of the hour as he was finally able to knock off Jader, who has been on a tear for the past two seasons. Mario Barrios (Crosslink) claimed the third quickest time in qualifying ahead of Danillo Ramalho (REM) and Michael Auriemma, who put three Orsolon Racing drivers in the top-five. 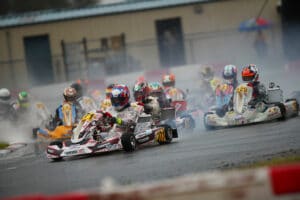 Gaia pushed his Tony Kart to the win as Orsolon Racing scored a one-two finish with Jader crossing the line in second. Mario Barrios was third before a push back bumper penalty relegated him to sixth and advancing his Team Crosslink teammate Miguel Mier to third ahead of Scott Roberts (Speed Concepts Racing) in fourth and Ramalho in fifth.

Toniolo and Cristea remained lock step at the front of the Micro ROK category as the duo finished more than three seconds ahead of their closest competitor. Romero was able to slot himself into P3 as both he and Rousseau each gained one position to solidify their positions in the top-five. Gaining three positions to come home fifth, Alessandro Truchot (Parolin USA) had a solid drive to make his first top-five appearance of the weekend. Following heat one, Rousseau was given a push back bumper penalty dropping him two positions and advancing both Truchot and Tristan Murphy (Team Kartnick) to fourth and fifth.

Speed Concepts Racing Junior ROK
With rain stopping and the track beginning to shed some of the excess water, Junior ROK drivers hit the track and it was all Speed Concepts Racing. Ayden Ingratta led the session early but fell victim to teammate and championship point leader Paul Bocuse, who claimed the pole position. Kekai Hauanio (OGP / CDR) used home track advantage to slot into P2 as Ingratta fell to third when the final checkered flag flew. Chase Hand (Rolison Performance Group) put himself in the top-five in two different classes on the weekend in fourth as Michael Costello (Team Benik) rounded out the top-five.

Bocuse rose to the occasion when the racing action started, taking the heat one win ahead of his Speed Concepts Racing teammate Ayden Ingratta. Kekai Hauanio had a tremendous drive after falling back on the opening lap but turned the fastest lap of the race to climb back to third. Jeremy Fletcher (Team Felon) jumped four positions to finish fourth as Sebastian Wheldon climbed to P5 and will look to carry that momentum into tomorrow. Following heat one, Fletcher was issued a five second penalty for a push back bumper dropping him to sixth.

Ramirez had a breakthrough win in the first heat passing Danny Formal with two laps remaining to take the win. Gulick was able to advance forward two positions to cross the line in P3 as AJ Myers would fall one to finish fourth. Jake French was on a charge gaining five to finish fifth while Axel Cabrera was the biggest mover advancing forward 16 spots to finish tenth.

ROKKERS will return to the track Saturday for three more sessions of wheel-to-wheel action as heats two, three and the weekend’s prefinal go green setting the grids for Sunday’s main events.

Stay tuned to the ROK Cup USA social media pages for news, information, photos, results and daily reports from the second round of the Florida Winter Tour at Ocala Gran Prix.