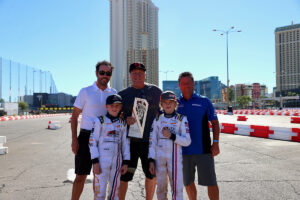 It was chamber of commerce weather for day two at ROK Cup USA ROK Vegas as two practice sessions kicked off the morning before qualifying set the grids later in the afternoon. As ROKKERs were able to fine tune their equipment before lunch, it was all business in the afternoon as ten classes and more than 350 competitors would fight for the coveted OMP Pole Position Award.

With the grids now set for four progressive heat races, wheel-to-wheel action will commence after morning warmup on Friday. With two heat races set for Friday and another two on Saturday, drivers will look to stay out of trouble and at the front of the field as they head towards Championship Sunday.

Prior to qualifying, Mike Maurini and RTD Media presented the 2021 Dan Wheldon Ambassador Award to Mike Speed. A veteran in karting and a leader in the sport, Mike has advanced drivers up and through karting with a major focus on driver coaching, development and winning. 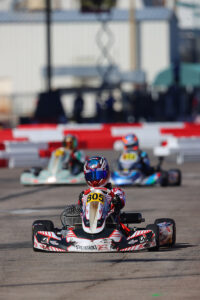 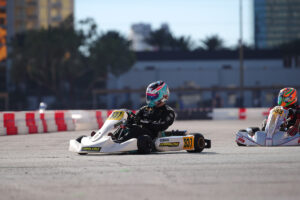 Nash Motorsportz ROK VLR Senior
Looking like no threat for the pole position through practice, Leading Edge Motorsports Danny Formal stole the pole position. With a fast time of 57.931, Formal edged Racing Edge Motorsports’ Adam Ali by a scant .073 as Alex Keyes Racing’s Kyriakos Sioukas will line up inside row two. Rolison Performance Group’s Caleb Shrader was the best of the rest with the fourth fastest lap of the session ahead of Italkart’s Remo Ruscitti. Nash Motorsportz drivers Ryan Vincent and Blake Nash secured the sixth and seventh place starting spots ahead of CDR’s Rocco Pasquarella. Racing out of the Mike Manning Karting tent, Colby Dubato was ninth ahead of GFC’s Ayrton Little in tenth. 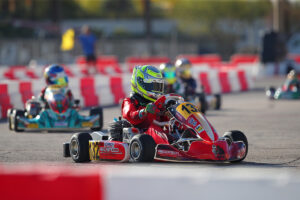 AM Engines ROK Mini
Divided into two groups, odd and even, it was Race Factory’s John Antonino who was the quickest of the twenty-four in group one ahead of Oscar Iliffe from Ironrock Raceway and PSA Check’s Kai Johnson. Team Benik’s Enzo Vidmontiene slotted into P4 ahead of AKT Racing Team’s Marthin Ramirez. With a time of 1:01.117 by Antonino, group two would hit the track with a quick time already established and with the understanding what would need to be achieved to have a shot at the pole position.

By lap three, APM Racing’s Ethan Lennon jumped to the top of the charts and managed to hold on to the position for the entire twelve-minute session. Supertune USA’s Diego Ardiles was second in the second group just ahead of AKT Racing’s Salvador Della Vecchia. Ironrock Raceway’s Jack Iliffe was the fourth fastest ROKKER of the second group, just ahead of Prime Powerteam’s Matthew Roach.

In the end, Lennon would retain the pole position after the group merge. 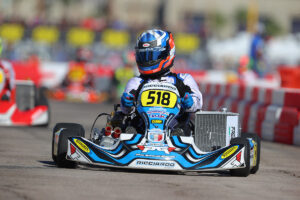 Dallas Karting Complex ROK Shifter Master
There were no less than five drivers in the ROK Shifter Master class that spent a lap or two at the top of the charts but in the end, it was Phil Giebler Racing’s Ryan Kinnear ahead of PSL Karting’s Jordon Musser by a mere .033. With the top-five separated by .180, Formula Works’ John Crow would lead Phil Giebler Racing’s Ryan Yop and CDR’s Peter Licciardi. Patrick-Otto Madsen put his ANSA Motorsports machine in the sixth position while PSL Karting put another driver in the top-ten with Nicholas Bedard in seventh. Rene Martinelli put his TB Kart into the eighth position ahead of Rolison Performance Group’s Mike Beeny and Victor Jimenez. 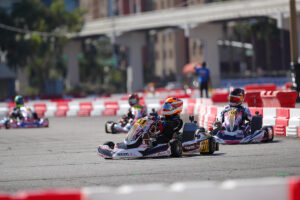 Rolison Performance Group ROK Senior
Ryan Norberg and Rolison Performance Group started the ROK Senior session on the top of the charts but was quickly replaced by Ryan Perry Motorsports’ Cole Morgan and then by Speed Concepts Racing’s Jack Jeffers. As the session progressed many drivers challenged but it was Jeffers that would hang on while Parolin USA’s Alessandro De Tullio had a solid last lap to jump from tenth to second. Norberg will begin his quest for a ROK Vegas title from the outside of the front row as will his Rolison Performance Group teammate Nathaniel Cicero. Morgan held on for the fifth quickest lap of the session but put the least amount of time on his tires while Canadian and Racing Edge Motorsports driver Gianluca Savaglio slotted into sixth. APM Racing’s Jake Craig returned to ROK Cup USA competition and will start seventh while PSL Karting’s Samuel Lupien, who was a last-minute entrant due to border restrictions, finished eighth. Alex Keyes Racing’s Kyriakos Sioukas earned his second top-ten start of the weekend ahead of PSL Karting’s John Burke. 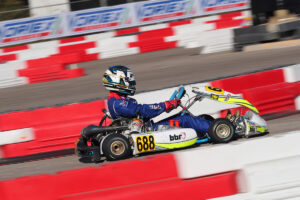 Orsolon Racing ROK Master
The ROK Master qualifying session was a dog fight as the top-four were separated by .085 after six laps with Full Throttle Karting’s Derek Wang leading the way.  The top-five would remain unchanged throughout the session with Derek Wang claiming the OMP Pole Position ahead of Rolison Performance Group’s Mario Barrios and perennial front-runner and Orsolon Racing driver Renato Jader. William Isaias put International Motorsports in the top-five with a fourth-place effort with Rolison Performance Group (RPG) putting another driver in the top-five with 60-year-old Billy Cleavelin. Scott Roberts put his Speed Concepts Racing Redspeed in the sixth position ahead of RPG’s Robert Maier, Carpy Racing’s Scott Carapellatti and Crosslink Competition’s Miguel Mier. 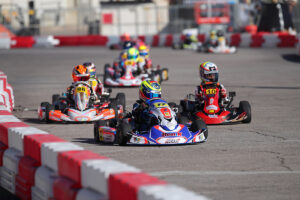 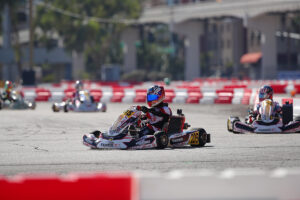 Speed Concepts Racing ROK Junior
Looking for his second OMP Pole position of the day, Speed Concepts Racing’s Ayden Ingratta looked like he had the honor in the bag until Chase Hand and Rolison Performance Group jumped to the top of the charts on the final circuit to earn the inside front row starting spot. Ingratta would hang on for P2 ahead of JC Karting’s Sebastian Wheldon and Supertune’s Jorge Ortiz. In his second race with the Rolison Performance Group outfit, Caleb Gafrarar was the fifth fastest combatant as Logan Toke put his Ryan Perry Motorsports entry in the sixth position. Multi-time winner in 2021, Jeremy Fletcher and Team Felon crossed the stripe with the seventh fastest time with G3 Argyros and Speed Concepts Racing having a tremendous run to eighth. Cameron Weinberg and Steven Miller rounded out the top-ten as they were less than .600 away from the pole position. 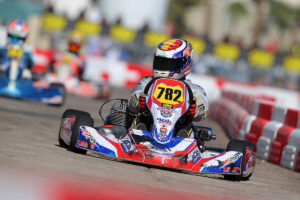 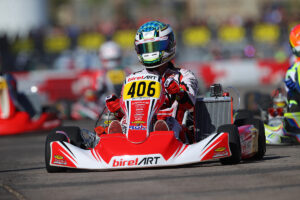 PSL Karting ROK Shifter
Just like the ROK Mini class, ROK Shifter would be divided into two groups as the gearbox class bolstered more than fifty entries and it was Leading Edge Motorsports and Danny Formal who set the bar in group one. Setting a lap time of 53.157, Formal was just ahead of the Ron White Racing duo of Aidan O’Neill and Ron White himself. Austin Garrison put his Rolison Performance Group entry in the fourth position as Factory Kart’s Billy Musgrave was fifth.

Group two packed some powerful punches led by PSL Karting’s Jake French and Checkered Motorsports’ AJ Myers. Both quickly jumped to the top of the charts with French turning the fastest lap of the two combined sessions at a 53.116 but was pushed hard by Myers at a .264. Checkered Motorsports’ Vincenzo Sarracino slotted into the third position ahead of GFC’s Hunter Pickett and DRT Racing’s Collin Daley.

Overall and after the group merge, it was French who will lead the field to green tomorrow ahead of Formal, O’Neill, Myers, White, Garrison, Sarracino, Musgrave, Pickett and Checkered Motorsports’ Andrew Bujdoso.

Tomorrow will be the first wheel-to-wheel action of the weekend beginning at 10:40am PDT.