With heavy fog in the area greeting ROKKERs on Friday morning, the sun would break through by the time practice began at 9am. With a pair of practice sessions before lunch, qualifying and the first wheel-to-wheel action of the weekend would go green in the afternoon. With a short, yet racy track, the first heats of the weekend were a precursor for what ROK competitors can expect during the round two finals on Sunday.

Heat #1
It was Ayden Ingratta who jumped out to the early lead in the ROK VLR Junior heat and never looked back. Opening a gap or more than two seconds by mid-race distance, it was Steven Miller (CDR) who was the driver on the move gaining five positions into P2. Cooper Shipman was up one as Camryn Reed (Iron Rock Raceway) gained seven positions as he slotted into fourth. Argyros settled into the fifth position and managed to hold station for the twelve lap heat. Of note, Caleb Gafrarar (Rolison Performance Group) hurt his ribs and withdrew from the weekend’s competition opening the door for others to fight for the race win and podium results. 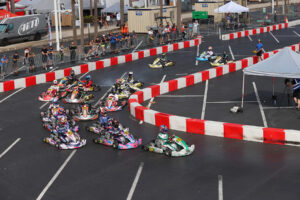 Heat #1
Jeremy Fletcher converted his pole position into the ROK VLR Senior heat one victory as he was able to take the charge from the opening corner and never looked back. Ryan Norberg was on a charge throughout the race and was setting fast lap after fast lap around mid-race distance but ran out of steam on his push to the front moving from fourth to second on the results sheets. Weston Duchak crossed the line in third holding Daniel Ali at bay as Gracie Rzedzian (Tecno) advanced forward five positions, getting past Ali on the final circuit to be classified fourth with Ali in fifth. 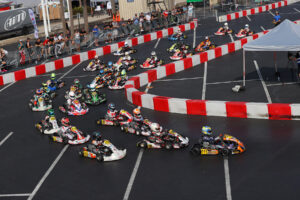 Heat #1
Carson Weinberg put Speed Concepts Racing and CRG on top of the Mini ROK heat one race results as he took the slimmest of victories, .020, over Jack Iliffe (Iron Rock) who advanced forward from fifth to second on the results table. Malcuit fell one spot to cross the line in the third position as Della Vecchia had the same sort of race progress to finish fourth. Max Cristea (PSL Karting) pushed his #139 entry forward two positions to cross the stripe in fifth. 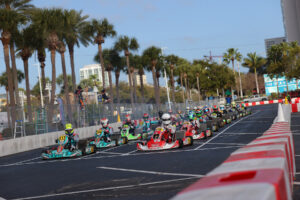 Heat #1
It was all Jordon Musser in the ROK Shifter Masters class on Friday as his pole position was quickly turned into a heat one victory by more than ten seconds. Daniel Dibos (ANSA) climbed to second on the results sheets as Patrick Otto-Madsen (ANSA) gained five to finish third. Rene Martinelli (TB Kart) was able to slot into the fourth position when the final checkered flag flew with Rondet in fifth. Of note, Musser’s fastest lap was nearly nine tenths of a second a lap faster than his closest competition. 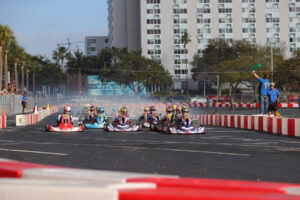 Heat #1
While Morgatto led the field to green, it was Ramos who led at the end of lap one as he moved to the point and looked to control the race. Marjin Kremers (PSL Karting) made a bold move to the front gaining four positions in the opening two laps, disposing or Morgatto on the second circuit. Kremers then made a successful bid for the lead on lap six while Morgatto followed him through and back to P2. Morgatto went back by Kremers in turn four on lap nine as De Tullio was able to charge into the third position and move forward again one lap later. Morgatto would hang on for the win ahead of Ramos and Kremers. De Tullio would cross the line in the fourth position, just ahead of Mendes in fifth while Jack Jeffers (Speed Concepts Racing) moved forward from his P11 starting position to finish sixth. 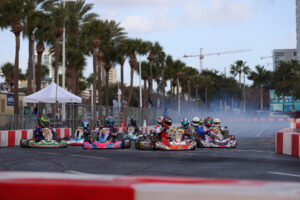 Heat #1
David Laplante (Premier Karting) had a monstrous opening lap as he was able to move forward six positions to cross the line in third. Isaias got the jump on the field and was more than one second ahead by the end of lap one while Scott Roberts settled into second. Ramalho was able to get back by Laplante for third at the mid-race distance as Renato David was able to do the same one lap later. Isaias was able to cruise to the victory, but it was Roberts who was one of the fastest drivers on track until the checkered flag flew. Roberts finished in second ahead of Ramalho, David and Laplante who rounded out the top-five. 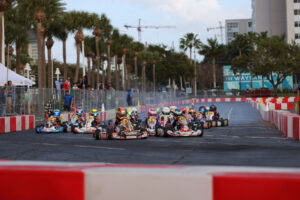 Heat #1
It was the outside front row starting position that would be advantageous for Zhao as David jumped out to the point and led lap one. Ramalho climbed to the top at the completion of lap six as pole position winner Rocco Simone followed him through to gain back one of his lost positions to second. Royce Vega (Team Benik) was on a tear as he pushed forward eight positions to finish third as Jackson Morley crossed the finish line in fourth. It was Decklan Deonarine (Goodwood Kartways) who gained eight positions as well to crack into the top-five in fifth. Following the heat Morley received a penalty for an incident on track that brought Deonarine forward another position and elevated Drew Walz (Mottazsport) to fifth. 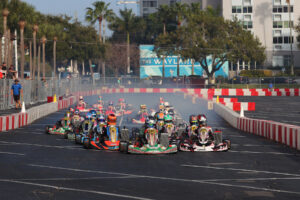 Heat #1
Similar to previous heats, it was the P2 started that got the jump on the field as Vergara closed the first lap at the top of the charts. Ingratta was forced to defend on the opening lap to hold onto second, but from lap two on was fully focused on moving forward. Jorge Ortiz (Supertune) made a move by Miller on lap five to take over the third position as Ingratta was able to get by Vergara on the same lap. Ortiz moved into second on lap six as Ingratta began to march away from the rest of the field. The second through fourth place battle would heat up in the late stages of the race as Ingratta drove off to the win. Ortiz would be the best of the rest in second as Vergara, Costello and Leonardo Escorpioni (Zanella Racing) rounded out the to- five. Following the heat, Ortiz received a penalty for an on track incident and was dropped to eighth on the results sheets. With a penalty post-race, Ingratta was dropped to fourth while Vergara was awarded the win. 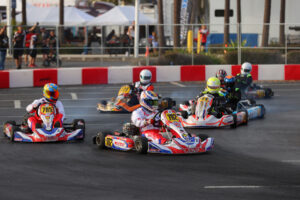 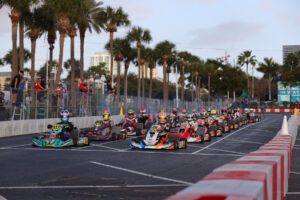 Heat #1
Daniel Formal was once again the driver to beat in the ROK Shifter class as he was able to get past pole position winner AJ Myers to take the heat race victory. In a race that featured very little passing, third through fifth remained unchanged with French, Sarracino and Davide Greco finishing in the top-five. Following the heat race, Greco was penalized bringing Michael Stevens (Stevens / Barbosa Racing) into the top-five.

ROKKERs will be back on track tomorrow for a busy day of action. With heat two, three and the prefinals on the schedule, by the end of the day tomorrow, the grids will be set for Sunday’s main events. For all today’s ROK Cup USA Florida Winter Tour results, click HERE.