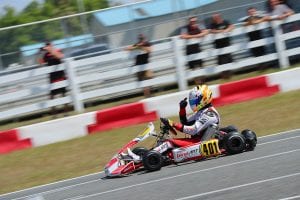 Incredibly close points championship races highlight the final day of competition.
On the pristine grounds of the Ocala Gran Prix facility, the Florida Winter Tour and its competitors hit the track for one last day of racing, marking the end to the 21st year of the North American winter karting series. Temperatures made their way into the 80’s as the on track action also heated up when series championships were on the line. The increased points for the final round kept the drivers on their toes and anxious about their standing as they hit the track for the extended races.

It was a weekend full of redemption for Mathias Ramirez (PSL / Birel ART) in Shifter ROK. The young driver for the “Red Army” had been one of the fastest drivers over the first two rounds, but two DNFs left the Floridian with only disappointment. Ramirez led all but one lap in the 26-lap final, just clear of local hero Zachary Hollingshead (TB Kart USA) at the line. Jimmy Cabrera (AKT / Kosmic) grabbed the final podium spot in a fight with a charging Rory Van Der Steur.
The series championship went to AJ Myers (Mad Old Nut / Croc Promotions), the standout driver to start the year across the country. Myers elected to run two fresh tires in his Saturday pre-final, catapulting him to second for valuable points over rival Danny Formal (Leading Edge / Formula K). However, Myers struggled a bit with the two worn tires on Sunday, dropping to eighth in the final tally while also making sure not to ruffle any feathers. In the end, it was enough to claim another winter championship and earn the Floridian a trip to Italy.
Shifter ROK Final – Top 3:
Shifter ROK Championship – Top 3: 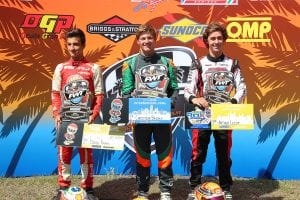 After having to watch two perfect weekends in Miami, Brazilian Diego Ramos (HR Motorsports / Kosmic) got to pull one off himself in Senior ROK. It had been a clinic all weekend and the final was no different, leading flag to flag for the 1.4-second win over Arthur Leist (PSL / Birel ART).
Christian Brooks (Orsolon / Tony Kart) had moved through the field after having dropped a few spots on the start, but once on the back door of Leist, the Californian knew that’s all the further he needed to go to claim the championship. In the final tally, Brooks would finish every round on the podium and will now take his talents to Lonato, Italy in October with his free entry as series champion.
Nicholas Hornbostel (Race Edge Motorsports / Kosmic) had himself inside the top three in the early going but dropped to fourth when it was all said and done. Emma Delattre (REM / Kosmic) had her best run of the series to place fifth.
Senior ROK Final – Top 3:
Senior ROK Championship – Top 3: 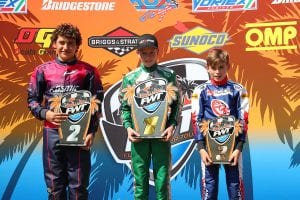 In his return to competition at the Florida Winter Tour, Connor Zilisch (Team Felon / Tony Kart) steadily moved his way forward in Junior ROK as if he was knocking the rust off as he went. Zilisch had missed the first two rounds with a rib injury and made his return in Ocala with an eighth place qualifying effort. The North Carolinian moved forward each stage of the weekend, claiming the narrow win over Enrico De Lucca (NF Sport / Kosmic). Justin Arseneau (Speed Concepts / Tony Kart) finished third after having dominated through the heats and pre-final.
Luca Mars (Speed Concepts / Tony Kart) had started the final from 11th after contact in the pre-final and needed to finish sixth or better to leave no doubt in the championship. The Pennsylvanian got to sixth in the opening lap and the rest was history, finishing fifth after allowing Dale Curran (REM / Kosmic) by with only a few laps left. Having already competed in Europe previously, plus his upcoming summer running the CIK Academy, Mars will be among the favorites to win in Italy at the ROK Final come October.
Junior ROK Final – Top 3:
Junior ROK Championship – Top 3: 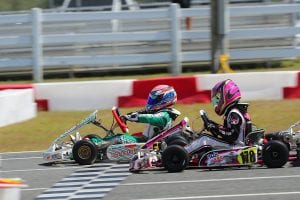 Kai Sorensen (Supertune USA / Tony Kart) left no doubt about his 2019 Florida Winter Tour Championship by picking up his third win of the series and building a record of near perfection over the first three months of 2019. The Lodi, California driver looks to be set for a monster 2019 season that will now include a trip to the ROK International Final where he’s ran well in the past and could very well match Zilisch as an American Mini ROK International Final Champion. Julian De Costa (JD Motorsports / Haase) had an impressive drive to second in his first trip to the Winter Tour this year, nearly passing Sorensen in the final corner, but ultimately came four-hundredths of a second short. Anderson Leonard met his teammate on the podium with a third place run, followed by Michael Costello (Benik) and Jorge Ortiz (Supertune USA / Tony Kart).
Mini ROK Final – Top 3:
Mini ROK Championship – Top 3: 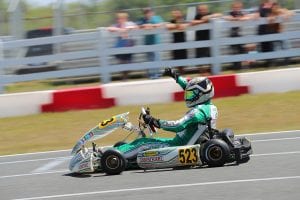 The fireworks began right away in the Shifter ROK Master 26-lap final when points leader Luis Schiavo (Goodwood / Kosmic) stalled his Kosmic Kart from his fourth place starting spot. As they lined up, Schiavo led Victor Jimenez (RPG / Tony Kart) by just 58 points heading into the final and needed to keep pace with the driver who sat on the pole position. However, having stalled the kart, Schiavo had to move to the rear of the field, spoiling his chance at the championship before the race even began. Jimenez went on to score the win in an intense early battle with Peter Licciardi (Team Midway / FA) before a charging Jordon Musser (PSL Karting / Birel ART) joined the fight and broke things up in his attempt to slot into the second position. Musser had charged all the way up from his 12th place starting spot after a stalled engine of his own in the Saturday Pre-Final.
Hernando Sanchez (Goodwood / Formula K) finished on the podium in third after taking advantage of the scuffle between Musser and Licciardi just past the halfway point. Schiavo eventually made his way back to his starting spot of fourth, followed by Licciardi in fifth.
Shifter ROK Master Final – Top 3:
Shifter ROK Master Championship – Top 3: 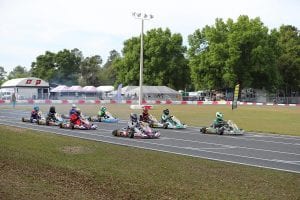 Renato Jader-David (Orsolon Racing / Tony Kart) became the only driver in the 2019 Florida Winter Tour to go a perfect 11-for-11 in scored racing sessions. The Brazilian-American won his third final this series in convincing fashion over Bruno Fusaro (NF Sport / OTK) and will now get his opportunity to compete against the world’s best Master ROK drivers in Italy this October. Adrian Donkers had his best result of the series with a third place podium.
Master ROK Final – Top 3:
Master ROK Championship – Top 3: 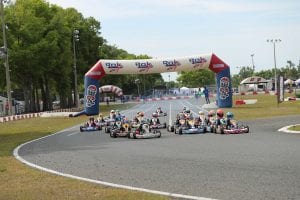 All weekend, Beckham Jacir (JC Karting / Kosmic) and Karsyn Walters (Supertune USA / Tony Kart) engaged in an incredibly tight battle out front in Micro ROK. The two South Florida talents gave onlookers one last show on Sunday in the 18-lap final, coming down to the final feet of track where Jacir nipped Walters at the line by .171. With the win, Jacir secured the series championship over Walters and Salim Hanna (Team Montoya / Tony Kart), who climbed four positions in Sunday’s Final to match his championship standing. All three drivers earned a free entry to the ROK The Rio event in late October for their series accomplishments.
Micro ROK Final – Top 3:
Micro ROK Championship – Top 3: 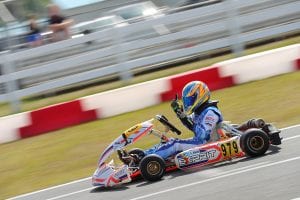 Before the final in 100cc Junior, the championship was a toss-up between Santiago Biagi (AM Engines / Exprit) and Chloe Chambers (MDR / Kosmic) after both drivers had split the first two rounds. In the final, Biagi made sure there would be no surprises, laying down a commanding win of over five seconds ahead of Chambers, who had raced closely with Connor Zilisch (Team Felon / Tony Kart) throughout the 26-lap main event. In an interesting moment, near the end of the race, Zilisch moved over for Chambers to pass in a display of sportsmanship as Zilisch deemed a previous overtake to be unfair. Adam Maxwell did not find the success he had in the first two rounds, but did find some redemption in the final as he climbed five positions to finish fourth and secure his spot on the final step of the championship podium.
100cc Junior Final – Top 3:
100cc Junior Championship – Top 3: 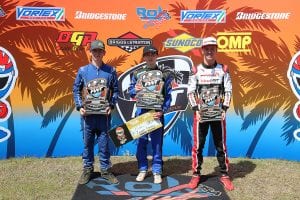 Dylan Amundsen (DP Racing / MGM) came up big down the stretch in the LO206 Senior Final, but came up just five points short in the championship to Zachary Linsell (MGM). As the leaders came into the final corner before taking the one-to-go, Jordan Prior (Prime Powerteam / Birel ART) went to the inside of Linsell for the lead, but left enough room on the bottom for Amundsen to force it three wide and pinch Prior in the middle. Prior and Linsell fought for position in second as Amundsen scooted by underneath, giving himself a healthy advantage that he used to distance himself on the final lap to take the win. Linsell fought off Prior down the stretch for second place, ultimately earning him the championship in the process.
LO206 Senior Final – Top 3:
LO206 Senior Championship – Top 3: 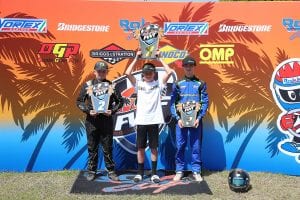 Tennessee driver, Elijah Skaggs (Ionic Edge / GT Machine) — a newcomer to the Florida Winter Tour — scored the win in LO206 Junior over Granger Perra (Kosmic) and Alexander Searle (Espionage). It was an impressive run for Skaggs after qualifying in 13th and starting the pre-final from 15th. The 13-year-old improved to 5th place in the pre-final before taking over the lead from Searle late in 18-lap final. Gianluca Savaglio (360 Motorsport / Intrepid) was one-second back in fourth at the line, earning the series championship in the process.
LO206 Junior Final – Top 3:
LO206 Junior Championship – Top 3:
While the 21st season of the Florida Winter Tour has come to an end, ROK Cup Promotions now looks to their first ROK Festival of 2019 on the beaches of Biloxi, Mississippi at the end of May for the “Battle at the Beach” at the brand new Finishline Performance Karting facility, just yards from the Gulf of Mexico. For more information, please visit the ROK Festival event page on the ROK Cup USA website.
Text by: Kart360.com
Photo credit: Cody Schindel/CanadianKartingNews.com
Tags:Florida, Florida Winter Tour, North America, Ocala Gran Prix
Share this article: