Outstanding start to the 2016 season for ROK Cup USA

Outstanding start to the 2016 season for ROK Cup USA

March 7, 2016 (Jupiter, FL) — It was an outstanding start to the season for ROK Cup Promotions as they kicked off Round 1 of the ROK Cup Florida Championship this past weekend at the Palm Beach Karting track in Jupiter, Florida. With 117 entries, this event marked the largest turnout the ROK Cup USA series has seen in the US to date. After a spectacular motorcycle stunt show, the eight classes competed at the first of four rounds in the Florida Championship, and the racing was nothing short of spectacular as the series looks to continue growing throughout the season. 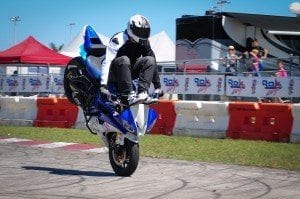 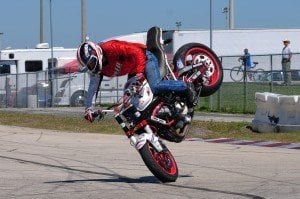 The youngest pack of drivers also boasted the biggest fields and some of the most exciting racing of the weekend. The track action was very close and competitive throughout the weekend in the Micro class, with a tight field mixing it up in the top 10. Going into Sunday’s pre-final, Team Felon’s #22 driver Jeremy Fletcher and AKT driver Nikita Johnson in the #7 battled it out for the lead in the pre-final, with Fletcher taking the top spot by 2 tenths of a second. In the final, the battling continued with Fletcher taking an early lead before Johnson overtook him for the top position. It was a close race but Johnson came out victorious in the 15 lap final, with Fletcher taking 2nd and Noah Baker finishing in 3rd. In the Mini class #155 Reece Gold was a strong contender all weekend going into the final but had some issues which forced him to drop back in the field and finish  14th. Benik #148 James Egozi, who just moved up to Mini this year, was also consistently fast. In the Final, Egozi ended up taking 1st place, with Costa Rican Nicola Zecchinato finishing 2nd and Tyler Maxson in 3rd. 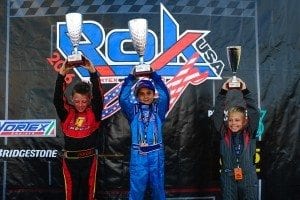 The Junior class was one the most exciting ones this weekend with 18 drivers and a competitive field where anything could be expected. In Sunday’s pre-final  #245 Gabriel Baco Sifontes, #219 Anthony Zappone , and #216 Ryan MacDermid lead the field, and after a very close battle for Baco Sifontes took the win. The final took a completely different turn, with MacDermid holding the lead in a battle with #256 Hollingshead, who quietly worked his way up throughout the weekend. Hollingshead ended up with the win, followed by #230 Lachlan De Francesco and  junior rookie #287 Jeremy Fairbairn. With 13 drivers this weekend, Ryan Norberg in the #348 was one to watch in the front of the Senior class pack all weekend. The whole weekend he battled with #323 Jesse Krill, #328 AJ Myers and #300 Zach Banks. Even though Krill tried to maintain his position the whole race, Myers and Banks ended following Norberg to the checkered flag taking 2nd and 3rd this weekend. In Master ROK, # 417 Ariel Castro led in the pre-final but retired early after a technical issue. Starting the final from the back of the field, he was able to work his way through the field and take the win, with #403 Miguel Gransaull finishing 2nd and #457 Francisco Da Costa coming in 3rd. 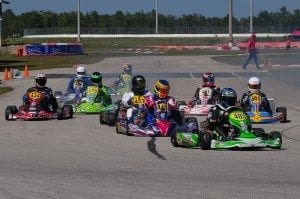 Making its debut in the series, the Junior Shifter class had 6 drivers competing in some very close racing throughout the weekend. The final saw things shake up a bit as a contact between #747 Mathias Ramirez and #708 Nicholas Sanchez forced both drivers to retire early, and #757 Tyler took the win with Jett Noland and Michael Stevens finishing 2nd and 3rd, respectively. Senior Shifter saw OGP drivers #528 Kyle Kirkwood and #529 #Austin Garrison sweep the weekend with a 1-2 finish the final. And making his debut in the ROK Cup USA, Brazilian national champion Bruno Grigatti fought hard against the competition and came in 3rd in the final. In the Master Shifter class, #652 Tom Hankinson led the final up until the last lap when he was passed by several drivers, and the final win went to #608 Guilherme Jacob, with Adriano Amaral coming in 2nd and Kurt Mathewson finishing 3rd. 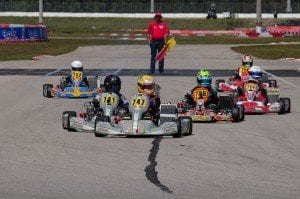 You can find the complete results from Round 1 on the official ROK Cup USA result tab. The next round of the ROK Cup Florida Championship will take place next month at the Ocala Gran Prix track, April 15-17, and registration for the event will open next week.