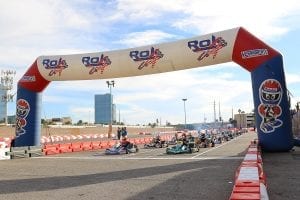 At the conclusion of the first annual ROK Cup Promotions ROK the RIO event, nine deserving race winners added 2018 ROK the RIO Champion to their resume. The first attempt at the temporary street circuit event went off without a hitch as teams and drivers raved about the program, professionalism and on track racing action.

This amazing event featured more than 225 ROKKERS from 15 different countries around the world, and the winners have been awarded with fantastic prizes and $35,000 in cash.

“We could not have pulled this off without the support of racers, teams and shops around the world,” explained Garett Potter. “Even with the great location, track design and staff, it would all be for nothing without the support of each and every person in the paddock and they truly made the event what it was, and for this I can’t thank them all enough. We also need to recognize the staff and the major part they had in the success of our event. This team makes me look good every time we hit the track, and I can’t put into words how much I appreciate their dedication to making each event the best possible. Thank you to our event sponsors, OMP Racing and Bridgestone Tires, JOTECH Karting, Fittipaldi Wheels as well as ROK Cup Promotions, ROK Cup USA, and the management team behind the entire program. We cannot wait until the 2019 season kicks off in only eleven weeks’ time.” 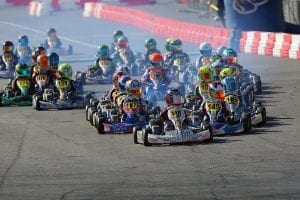 From the Bridgestone Tires hospitality platform to the OMP Racing sponsored mechanics stand, the event was run to near perfection on a time specific schedule. Off track, the Bridgestone Tire Changing contest and Halloween in the paddock provided for great fun amongst teams and their competitors. The smiles were prominent around the paddock and the Saturday evening after party was a great way to close a solid event week.

Potter added, “The racing action was some of the best that has been seen in quite a while. The track proved to be difficult, yet racy for the ever-reliable Vortex ROK powerplants as very few races featured runaway victories.”

Leading the way in Micro ROK, the youngest division on the weekend’s docket, was Parker Delong as he claimed the checkers and secured the first ever ROK the RIO Micro ROK Championship. Delong continually improved throughout the weekend scoring the fourth heat race win and carried that momentum into Saturday to take the main event win. The hotly contested Mini ROK division was bested by James Egozi as a last lap pass solidified his position at the front of the field. Kai Sorensen looked to have the victory in his grasp as a lead of ten kart lengths with two laps to go was quickly evaporated as Egozi dug deep to come out on top. 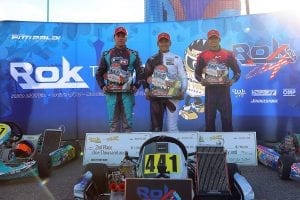 A familiar last name in motorsports topped the results sheet in ROK Junior as Sebastian Montoya was the survival of the fittest. Alessandro De Tullio worked his way forward and waged his challenge before contact with Thomas Nepveu forced him into the barriers. In the end, it was Montoya taking the ROK the RIO victory and championship followed by Connor Zilisch who came on strong at the end. Coming from 27th on the grid to stand on the podium was Italian Paolo Ferrari, who was the biggest mover of the race and if it wasn’t for some fierce battles mid-race, he could have had a shot at the win.

It was a strong showing for Canadians in the Vortex ROK Senior class as Ryan Macdermid and Zachary Claman Demelo were ones to watch in the final. Macdermid took the lead early from his pole position starting spot and led while Demelo fell back into the fourth position. Biding his time and saving his equipment, Demelo worked to pass the third and second place drivers of Axel Cabrera and Jake Denmark-Gessel before setting his sights on Macdermid. Closing the eight-kart length gap in a matter of laps, Demelo slipped by Macdermid down the long back straight with two laps remaining, but Macdermid returned the favor on the last lap, just three corners from the end. Macdermid topped the podium with Demelo in second. Cabrera stood on the podium in third. 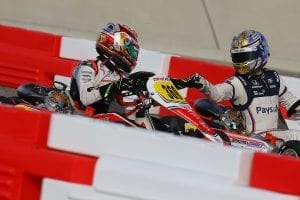 Renato Jader capitalized on his two heat race wins and main event pole position to take the ROK Master victory to be crowned ROK the RIO Champion. Scoring the win in the 25-lap final by 1.137 seconds over Billy Cleavelin, Jader capped off a great weekend of competition. Cleavelin scored the fastest lap of the race en route to the second step of the podium while Paul Bonilla rounded out the top-three.

Mathias Ramirez provided a new team their first big win as he outlasted Danny Formal in an epic ROK Shifter battle. The duo was clearly the class of the field finishing 6.824 seconds ahead of third. A chess game that resulted in strategic passes and defending in the flowing ROK designed circuit, Ramirez won the drag race to the line taking the win by a scant .080 seconds. Jimmy Cabrera was the best of the rest coming home third.

Jordan Musser converted his row two starting position into a victory on Saturday as he secured the ROK Shifter Master win. Though he was not the fastest kart on the track, Musser put his experience to use to take the checkers by 1.501 seconds. Ryan Kinnear would cross the stripe in second ahead of Rod Clinard in third. 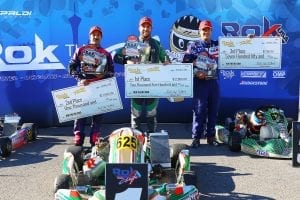 Jenson Altzman showed up Saturday morning to race and scored a big victory in the 100cc Senior class. Starting from outside the second row in the fourth position, Altzman methodically worked his way forward to best Cooper Becklin who crossed the stripe in second. Abby McLaughlin had a spirited drive forward and gained five positions to finish third to round out the podium. In the 100cc Masters class it was Jonathan Silva who dominated the main event opening a big lead and never looking back. Silva went on to score a 6.558-second victory over Travis Irving and Tim Meyer Jr., who rounded out the podium.

Potter continued, “Congratulations to all of our champions and thank you to our teams, drivers and sponsors. We look forward to seeing you all at the 2019 Florida Winter Tour and Challenge of the Americas in the first quarter of the year.”