Miguel Costa jumped out to the early lead after a strong start out of turn one from pole position. On lap two, Sebastian NG made his move at the end of the back straight heading into turn two to take the lead. The lead was short lived for Sebastian NG, as Costa returned the favor in turn one less than a lap later. Behind the two leaders a small gap started to form as Nikita Johnson, Alex Powell, and Ernesto Bueno competed for third.

Bueno worked his way into third and soon would catch the leaders as they began to battle. Just after halfway, Johnson lost touch to the front group making it a quartet to fight it out for the win. Lap after lap the battling at the front settled, which allowed Costa and Powell to pull away from the field. It looked as if Powell had something for the final two laps, yet he was unable to pull the trigger. This meant Costa came home with the win followed by Powel and Popow.

Point leader Johnson would fade to 8th, which now makes it a much closer challenge going into the final round in two weeks in Palmetto. 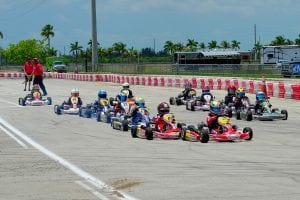 There was not much action at the front of the race with Jacob Guilherme and Tom Hankinson both pull gaps between each other and third position. The real battle was for the final podium position. Vicki Brian quickly moved into third at the start followed by Kurt Mathewson and Farshad Bagheri. On lap seven, Bagheri was able to make an aggressive move on his teammate Mathewson in search of Brian. The two duked it out, but Mathewson asserted himself in fourth. With two laps to go a lap driver interfered with the battle for third allowing Mathewson to slip by on the outside. 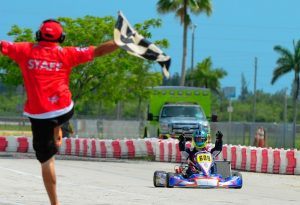 Red Flag Finishes ROK Junior and Keel with the Win

Starting from pole position, Arias Deukmedjian took the early lead followed by Jeremy Fairbairnm, Tyler Gonzalez, and Aiden Keel.  On lap five, Gonzalez made his move into second under the brakes in turn two. The following lap Keel executed the exact same pass on Fairbairn. In the meantime, Deukmedjian was able to pull a small lead over second and third. One lap before halfway Keel made a move on Gonzalez for second who tried to hang on around the outside. This did not work out so well for him as he fell back to the sixth position.

With a 1.2 second gap to make up, Keel put his head down in an effort to close on Deukmedjian. This only took four laps and Keel attached himself to the rear bumper with Fairbairn and Cabera in tow. Keel wasted no time aboard his Birel ART taking the lead and pulling a gap corner after corner. With two laps to go, the race was red flagged for an incident involving Jade Hubert, which ended the race. This gives Aiden Keel the win followed by Deukmedjian, and Fairbairn. 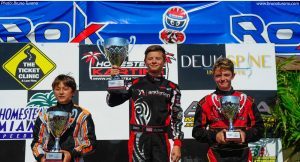 Miguel Gransaull Comes Through in the Final in Masters

It was not an easy weekend for Miguel Gransaull , but the only thing that matters is the final and he went untouched on his TB Kart. Behind him there was a little bit of racing in the early stages and as the laps went on Rodrigo Ospina and Dario Callegher stretched the gap from the remainder of the field and themselves to finish in the above positions. 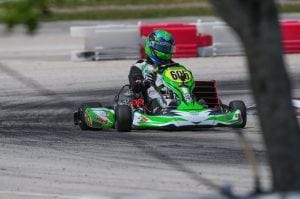 Is there a cruise control button on Kirkwood’s kart?

In one of the least action packed races of the weekend, Kyle Kirkwood kept the lead at the start and never looked back. Victor Franzoni also held his position in second followed by Ryan Norberg. There was no pressure on any of the drivers, but in the closing laps Norberg retired after a radiator bracket broke. This moved Franco Carabetta into third for the final result. 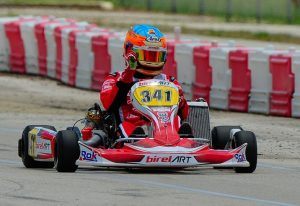 Noland Holds off a Charging Ramirez in ROK Shifter Junior

Straight from the start there was an incident involving Arias Deukmedjian that forced the AM Racing driver to retire. Nicholas Sanchez was able to get a rocket start and take the lead from thid, but was short-lived as Jett Noland attacked and went straight to the point. While this was happening at the front, Mathias Ramirez slowed, but quickly got back up to speed losing about one second to the lead trio. He began to set fast lap consistently and moved into third position with 10 laps to go.

In the final few laps Ramirez moved into second position and closed on Noland. He was able to make one lunge into turn one, but Noland shut the door on him and the gap from this allowed Noland to cross the line with the win. After the race Ramirez was penalized one second for excessive track limits violation putting him behind Nicholas Sanchez in third. 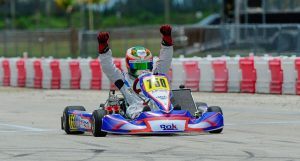 From the outside, Reece Gold did not get the best start and fell to fifth position which affected the rest of this race. Tyler Maxson held onto the lead, but the race was red flagged on lap two.

After the red flag Maxson continued with the lead, but Luca Mars was able to work his way into second position. The two teammates hooked up and began pushing to stretch a sizeable lead over Alessandro De Tullio. On the final lap, Mars decided to make his move after pushing Maxson nearly the entire race. After a great run exiting turn one he was able to make the move at the end of the long back stretch to take home the win in his Benik debut. Behind the top three it was intense with Montoya taking fourth followed by Ashton Chilton who had a strong run. 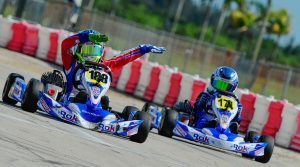