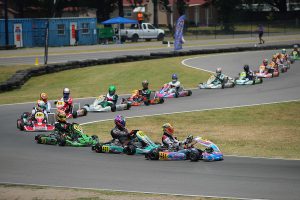 Heat, humidity, and rain gave competitors all they could handle on Saturday.

Weather played a big factor on Saturday as it threw multiple curve balls at teams and competitors in Biloxi. Two different weather systems came through just about an hour apart that brought with it rain and elevated winds. The second of the two systems was much heavier rain than the first, resulting in most of the final round of heats being ran under wet conditions.

ROK Shifter
Davide Greco has emerged with the lead in an unpredictable Shifter ROK division after four heat races. The Canadian grabbed the heat 3 win to help him edge out his PSL Karting teammate, Mathias Ramirez. Ramirez would win heat four in the wet comfortably over Greco, which tied him with Jimmy Cabrera for second, ultimately getting the tiebreaker from qualifying.

Vincenzo Sarracino has impressed this weekend with a steady climb to the front after qualifying 14th. The Floridian’s 4-2-2-5 report card was jsut one point behind Ramirez and Cabrera to slot him into fourth. Danny Formal, winner of two heats and the pole position, will roll off fifth for the Final after a broken chain sidelined the Costa Rican with three to go in heat 3 while leading. Look for the Formula K driver to make a charge in the 20-lap final.

ROK Senior
Probably more unpredictable than Shifter has been Senior ROK, showcasing four separate winners in the heats. Christian Brooks was one of those winners and the Californian was by far the most consistent of the bunch which has awarded him with the pole for Sunday’s Final. Axel Cabrera remained inside the top five all day on Saturday after having grabbed the pole on Friday, setting him up for outside row one. Arthur Leist has led some laps and looked quick at times, but it has not yet translated to a win. The Brazilian will start from the comfortable inside row two position in third.

Nicholas Hornbostel was the initial heat race winner on Friday, but was the recipient of some contact that dropped him down the order on Saturday. All in all, the Canadian was just one point short from starting third and will roll off in fourth. Colby Dubato will start from fifth and was the heat 4 winner after a wild last lap propelled him into the lead. 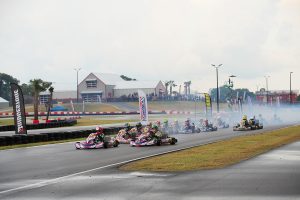 Both Thomas Nepveu and Diego Ramirez have blemishes on their report card that put them sixth and seventh, but make no mistake, they will likely be making a charge to the front in a lengthened final session.

ROK Junior
Just two different winners have emerged in the Junior ROK category, both of which will start from row one. Canadian Dale Curran and American Luca Mars came in as two of the favorites and they have not disappointed. Curran excelled in the rainy conditions of heat 3 and 4, while Mars did his damage in the dry heat 1 and 2.

Joey Atanasio has been right on the doorstep of a win and will look to get over that hump in Sunday’s Final when the Floridian starts third, directly behind his REM teammate. Ryan Shehan has improved each heat after a 17th place qualifying effort and has made it all the way to fourth. The kid from Barbados, Kyffin Simpson, managed two top four heat race results that have him rolling off fifth, one place better than his qualifying run.

Mini ROK
Mini ROK has been uncertain as no driver had less than 11 points in the heats. Supertune USA wrapped up the front row for Sunday’s Mini ROK Final with driver’s Enzo Deligny and Kai Sorensen. Both drivers scored one heat race win apiece and will start from exactly where they qualified.

The two big movers in the category make up row two with Cooper Shipman and Sebastian Wheldon. The two drivers qualified 18th and 20th, respectively, and have driven themselves into a shot to win here this weekend. Michael Costello too has improved greatly on his 12th place qualifying effort to fit into the top five.

The two other heat race winners were Sebastian Garzon, who starts sixth, and Caleb Gafarar who starts 12th after finding Saturday much more difficult than Friday. 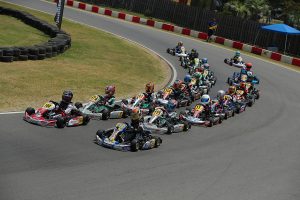 ROK Shifter Master
A first heat DNF didn’t keep Peter Licciardi from the pole on Sunday as the TB Kart driver benefited greatly from the two rain systems of the day, winning both wet sessions. Friday Polesitter, Ryan Kinnear, was the man the beat in the first two dry sessions, winning both, but struggled in the wet with a DNF of his own in heat 3. The Texan should be ok for Sunday as the weather looks dry as he rolls off in second.

Nathan Steward has improved three positions from his qualifying effort to find himself in third after a consisten 3-4-3-4 report card on Saturday. Andre Martins excelled in the rain, finishing with two second places finishes to go with a 7th and a 5th to put the Orlando resident in fourth. Victor Jimenez has not looked as strong as he did in the Winter Tour, but nevertheless has a top five kart and has one more day to rebound.

ROK Master
In a game of chance, it’s unlikely that after 40 laps of heat racing the Master ROK standings would remain unchanged from qualifying, but that’s what we have here in Biloxi. Danilo Ramalho picked up two wins, with the final heat being crucial in the rain as his nearest rival, Ariel Castro, finished fifth. Castro has looked impressive at times, but was unable to improve upon his second place qualifying effort. Vatche Tatikian, Timothy Meyer, and Curtis Terry fill out the remaining top five.

Micro ROK
Kai Johnson rebounded from an opening heat DNF to lead the Micro ROK category into Sunday. The young Floridian ended up sweeping the heats on Saturday to take a wave of momentum into the final day. Carson Weinberg has dropped one position from qualifying in second, followed by Oliver Wheldon who has steadily progressed each session. Salvador Dellaveccia and Derek Wargo finalize the top five after Saturday. 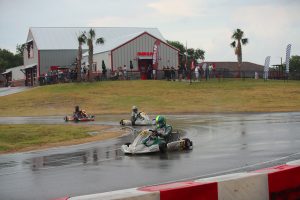 Junior 100cc
Chloe Chambers has been a runaway driver in the Junior 100cc category thus far. The Northeast driver swept the first three heats before electing to sit out the final, rain-soaked heat. Tanner Garvin has only been able to watch Chambers from afar in second and will look to improve his machine before the karts hit the track for one last feature on Sunday. Camryn Reed and Granger Perra will make up row two.

Briggs 206
Standouts from the Winter Tour have emerged to the top of the Senior LO206 category here in Biloxi. Teammates Alexander Searle and Zach Linsell are tied in points after 40 laps of racing, but Searle gained the advantage from his friday qualifying effort. Dylan Admundsen has been alone in third for most of the weekend and that’s where he will roll off Sunday morning. Elmer Edmndson Jr. and Macon Moore round out the top five.

Three-time heat race winner, Camryn Reed, will start from pole in Junior LO206. The two drivers behind Reed, Corry Sam and Braxden Tregre, kept the pressure applied throughout Saturday and was likely a sign of things to come on Sunday as the trio has been tight all weekend. Granger Perra and Brant Boado each grabbed a top three result in a heat race to get themselves into fighting positions in fourth and fifth.