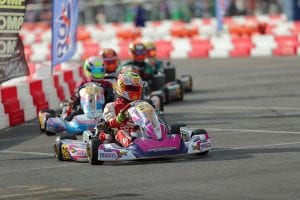 A full day of heat racing capped off by Ramos earning $1,500 in dash for cash event.
Saturday is now in the books after a full day of heat racing has set the drivers up for Sunday’s final acts. Round Two of the 2019 Florida Winter Tour by ROK Cup Promotions in Miami Gardens, Florida now comes down the final day of action for drivers looking to make improvements in the points standings.
The day was capped by an exciting 10-lap exhibition event for the top six qualifiers in Senior ROK. Diego Ramos walked away with 15 crisp $100 bills after he successfully held off Arthur Leist and a pack of karts in an Australian Pursuit-style race that captured the attention of the entire paddock. The race was supported by members of the karting media, including Kart360, Canadian Karting News, eKartingNews, and RTD Media.

Mathias Ramirez (PSL Karting / Birel ART) was able to capture two heat race wins and will sit from the captains seat in the Shifter ROK pre-final, followed by Danny Formal (Leading Edge / Formula K) and Davide Greco (PSL Karting / Birel ART). Ramirez has increasingly improved each performance thus far from a second place qualifying effort all the way to a 3.5-second victory in his final heat. Although no finish outside the top two, Formal has faded just a bit and will need to regain the speed he had on Friday if he wants to keep pace with the Birel ART.
AJ Myers (Croc Promotions USA / Mad Croc) will roll off fourth, and as of now appears to have a third place kart. However, we saw how he turned it on Sunday at Round 1, showing anything is still possible for the Floridian. Rory Van Der Steur (Team Felon / Tony Kart) and Andrew Bujdoso (Croc Promotions USA / Mad Croc) have positioned themselves in fifth and sixth. Both men have made huge strides to get where they are after qualifying 12th and 26th, respectively.
Shifter ROK Heat Standings – Top 10 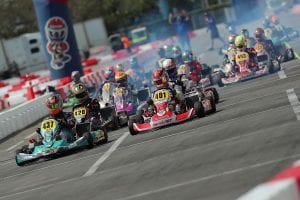 The winning streak remains intact for Christian Brooks, as he swept the heat races in Senior ROK on Saturday. However, the victories have not come as easily as they did in January, as Brooks has lost the lead multiple times only to regain the advantage in the waning moments. Diego Ramos (REM / Kosmic Kart) and Eduardo Barrichello (Orsolon Racing / Tony Kart) had 11 and 12 points, respectively, to slot into second and third. Andre Nicastro (NF Sport / Kosmic Kart) will roll-off fourth and has been one of the other drivers to lead this weekend, however, a spin in the second heat hurt the Brazilian’s resume. Fifth on the scoreboard is freshmen Senior ROK driver Arias Deukmedjian (Leading Edge / Praga). The Floridian has ran as high as second on track and has the speed to contend for a podium position.
The other driver to lead laps this weekend is Athur Leist (PSL Karting / Birel ART). The Brazilian is no-doubt one of the quickest here this weekend, but he too was involved in the spin with Nicastro in heat two, which has dropped him to eighth on the pre-grid for Sunday morning.
Senior ROK Heat Standings – Top 10

The script has flipped since qualifying in Junior ROK. Luca Mars (Speed Concepts / Tony Kart), who had qualified fifth, is now leading the 36-kart charge into Sunday. Alessandro De Tullio (AM Racing / Exprit) was the most consistent of them all in the heats, placing second in all three, which is where he will begin his day on Sunday. Enrico De Lucca (NF Sports / Kosmic Kart) will start on the inside of a charging Santiago Trisini (Zanella Racing / Kart Republic) on row two, followed by Friday polesitter Diego Contecha (Orsolon Racing / Tony Kart).
Junior ROK Heat Standings – Top 10 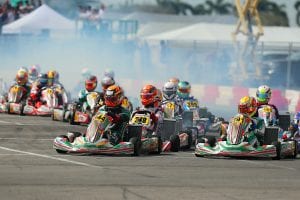 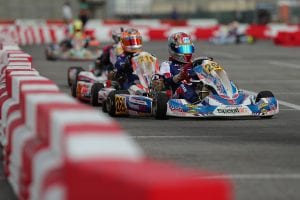 Renato Jader-David (Orsolon Racing / Tony Kart) has a firm grip on the Master ROK field again for round two, extending his winning streak in the process. With a clean sweep of the heats, the Brazilian-American will start from P1 for the Sunday Pre-Final. Steven Heffley (Tanda / Praga), Rodrigo Ospina (Team Montoya / OTK), Francisco Marquez (Orsolon Racing / Tony Kart), and Christian Saa (AM Engines / OTK) cover the remaining top five. Andres Fonseca (Leading Edge / Praga), who has appeared at times as the nearest competitor to Jader-David, will start from sixth after a disqualification in his final heat race.
Master ROK Heat Standings – Top 10

We’ve seen three heat races and three different winners in 100cc Junior, making it one of the most competitive categories this weekend. Santiago Biagi (AM Racing / Exprit), by one point, has captured the pole position for Sunday’s Pre-Final over round one winner, Chloe Chambers (Mike Doty Racing / Kosmic Kart). William Cox (Team Felon / Tony Kart) won the first heat and will line up on the inside of row two.
100cc Junior Heat Standings – Top 10 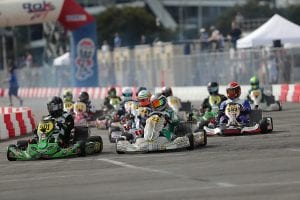 Enzo Vidmontiene (International Motorsports / Benik Kart) has defended his pole position through the heats in Micro ROK. Karsyn Walters (Supertune USA / Tony Kart) has improved one position to sit second in the standings, ahead of Mario Said (Team Montoya / OTK). Round one winner, Beckham Jacir (JC Karting / FA Kart) has moved up to sixth after a DQ in qualifying.
Micro ROK Heat Standings – Top 10