FWT ROUND 2 MIAMI: SUNDAY REPORT
FWT ROUND 2 MIAMI: SUNDAY REPORT
Posted by ROK Cup USA on February 19, 2019 in News
Many crucial points were obtained in the last chance drivers had to positions themselves for the final round in March.
The final day of the penultimate round of the 2019 Florida Winter Tour by ROK Cup Promotions has wrapped up under spectacular conditions. The Hard Rock Stadium venue played host for each of the first two rounds and brought with it an atmosphere unlike any other the series has seen in its 21 year history. In total for the weekend, we saw over 160 drivers compete between the Florida Turnpike and the home of the NFL’s Miami Dolphins.
Many familiar faces stood atop the podium on Sunday as we saw six repeat winners from round one, including Renato Jader-David, Christian Brooks, Beckham Jacir, Kai Sorensen, Luca Mars, and AJ Myers. The second round also brought with it an increase in points towards the season championship, which some drivers were able to take advantage of as they used the system to propel themselves into the final round in four weeks time. 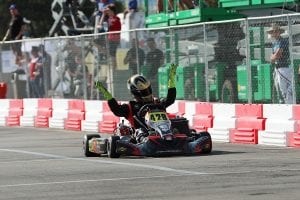 The going was tough for AJ Myers (Croc Promotions USA / Mad Croc) on both Friday and Saturday, but that became a distant memory on Sunday. Much like in round one, the Mad Croc driver didn’t find his full potential until more grip showed up on Sunday.
Danny Formal led in the early going after moving past an ailing Mathias Ramirez. Lap four would see Ramirez pull to the side of the track with a seized engine, an event he later said he knew was coming on lap one. Davide Greco was keeping pace with Formal early, but soon would lose his runner-up position to Myers who started his attack.
It was a few laps past the halfway mark of the 18-lap final when Myers finally overtook the Costa Rican on the Formula K with minimal defensive effort. The gap soon came to be over a half second advantage and growing, as Myers took his first checkered flag of the week; his second main event win in the championship.
Formal followed in second and will live to fight another day in Ocala for round three. Greco trailed in third, finishing a great weekend and he too still has a chance as a championship contender.
The race for fourth was intense down the stretch between the group of Andrew Bujdoso (Croc Promotions USA / Mad Croc), Giano Taurino (Mad Croc), Collin Daley (DRT Racing / DR Kart), and Jimmy Cabrera (AKT / Kosmic Kart). Cabrera would finish fourth, his best result of the weekend, after Bujdoso found the barrier wall on the final lap while being passed by Taurino. It was an unfortunate end for Bujdoso who had worked himself into the top five after qualifying in 27th.
Shifter ROK Final Standings – Top 10 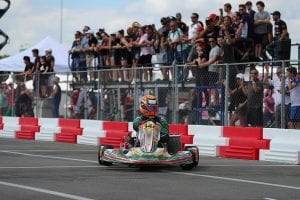 Christian Brooks has now went through two weekends of the Florida Winter Tour without having finished anything other than first place in Senior ROK. It’s a feat that Brooks has made look easy in each final, with the most recent win coming by nearly two seconds in today’s 18-lap main event.
The opening lap saw a tight battle inside the top five with karts nose-to-tail, but eventually that string of karts would be spread out when Arias Deukmedjian tagged the barrier on the exit of turn 12 while running fourth. Karts scattered to avoid the spinning Praga as they spread out onto the opening straightaway.
By lap six, Brooks had broken away by over one second and the rest of the race was history. Arthur Leist (PSL Karting / Birel ART) and Eduardo Barrichello (Orsolon Racing / Tony Kart) each drove comfortably in second and third. Diego Ramos moved into fourth on lap 11 over Andre Nicastro and held on by a slim margin over his Brazilian compatriot. Nicastro would eventually receive a penalty for a jumped start, promoting Nicholas Honbostel to fifth.
Senior ROK Final – Top 10 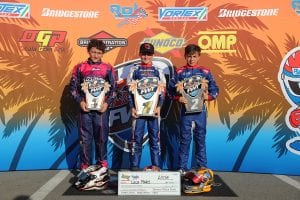 In what had been a very competitive category this weekend prior to the final, Luca Mars (Speed Concepts / Tony Kart) came in on a mission to win in the 18-lap main event. From the drop of the green flag, the round one winner led every lap on his way to a commanding 3.5-second win. The victory extends the Pennsylvanian’s lead in the points standings, as he has a firm hold on the championship heading into the final round in Ocala.
Alessandro De Tullio (AM Racing / Exprit) and Enrico De Lucca (NF Sport / Kosmic Kart) competed down to the wire for second, with the former getting the edge by under two-tenths of a second for the better podium position.
Junior ROK Final Standings – Top 10 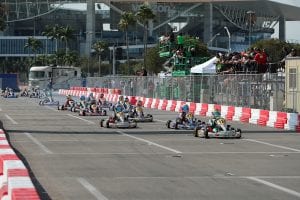 Everything had set up perfectly for the Supertune USA drivers of Kai Sorensen and Anderson Leonard. The final lap had the two Tony Kart teammates out front and looking to score a 1-2 victory for the Indianapolis-based squad. As the lead trio, including Riccardo Ianniello (NF Sport / Kosmic Kart), made their way to the turn 8-9 complex, Leonard tried a pass on Sorensen that slowed the two teammates, allowing Ianniello to drive under both and into the distance for the win. Unfortunately for Iannello, a driving penalty from earlier in the race was handed down, dropping him two positions and promoting Sorensen and Leonard.
Ianniello salvaged a podium position, despite the penalty. Jack Jeffers (Orsolon Racing / Benik Kart) was noticeably absent from the top five after having led for much of the first half of the race. The Texan spun while being passed for the lead on lap 11, dropping him down the order and having to recover to sixth at the finish line.
Mini ROK Final Standings – Top 10 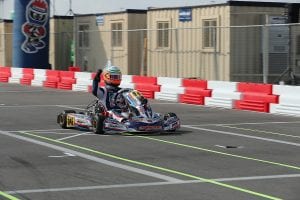 Luis Schiavo (Goodwood / Kosmic Kart) moved to the point of the 13-kart Shifter ROK Master category on lap five and never looked back, cruising to a 3.7-second win. The class of the field had been Victor Jimenez (RPG / Tony Kart) until a wreck in the pre-final put the points leader to the back of the grid for the final.
As Jimenez made his way through the field in the 18-lap final, it felt as though the round one winner would bring the fight to the rear bumper of Schiavo, but that fight never came. Jimenez hooked wheels with Rene Martinelli on a pass for second to open lap 15, ending Martinelli’s race and later bringing a penalty to Jimenez for the contact.
With the win, Schiavo and Jimenez are now set for a very close championship race for round three in Ocala.
Shifter ROK Master Final Standings – Top 10 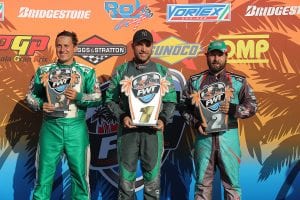 Two rounds of perfection is now in the books for Brazilian-American Renato Jader-David (Orsolon Racing / Tony Kart) in Master ROK. The Orsolon Racing driver had a weekend that was an identical copy of the domination we saw in January. Two-thirds through the 18-lap final, Jader-David had stretched his lead to over 6-seconds as he cruised the final six laps to yet another comfortable victory.
In heat racing, Andres Fonseca (Leading Edge / Formula K) had been one of a very few who had given Jader-David a test, ultimately finishing a comfortable second over Rodrigo Ospina (Team Montoya / Tony Kart). Flavio Menezes and Steven Heffley had the closest battle on track for fourth, with Menezes overtaking Heffley with three to go before extending his advantage in the closing laps.
Master ROK Final – Top 10 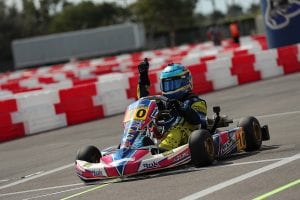 Micro ROK Round One winner, Beckham Jacir, ended the weekend much better than it had started. The South Florida resident received a technical DQ on Friday that would lead to a 12th place start for each of his three heats. Patience and determination paid off for the young driver, as he improved five positions to win the pre-final and went flag-to-flag in the 15-lap final.
Karsyn Walters (Supertune USA / Tony Kart) followed by 3.694-seconds to finish runner up, trailed by Friday polesitter Enzo Vidmontiene (International Motorsports / Benik Kart) to round out the podium.
Micro ROK Final Standings – Top 10 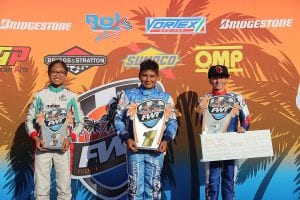 The competitive 100cc category once again showed everyone a close, hard fought final. Santiago Biagi (AM Racing / Exprit) emerged from a four kart battle that came down the closing laps. Nearly every lap of the 18-lap feature saw a new leader, or at the very least, a position change inside the top four. Kyffin Simpson (Speed Concepts / Tony Kart) and round one winner Chloe Chambers (Mike Doty / Kosmic Kart) joined Biagi on the podium in second and third respectively. Ian Aguilerra (Excuderia Telemex-Fussion / Exprit) was also right in the mix throughout the race, but would catch a starting penalty that dropped him to sixth.
100cc Junior Final Standings – Top 10