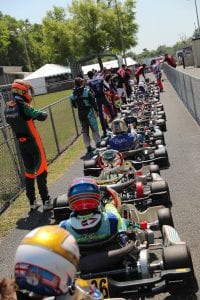 Grids set for final weekend in 2019 Championship from Ocala, Florida.
Clear skies set the tone for a picture perfect official opening day as 201 entries made their way around the Ocala Gran Prix facility for the third round of the 2019 Florida Winter Tour by ROK Cup Promotions. With the championships now in sight for many drivers,  qualifying proved crucial for those drivers who need to both defend their position at the top or make up ground as this weekend now becomes their last opportunity to make a move in the standings.

Local hotshoe Zachary Hollingshead (TB Kart USA) edged fellow Floridian Mathias Ramirez (PSL Karting / Birel ART) in Shifter ROK qualifying by .013. Both drivers aren’t figured to be in the championship running, but they will be a factor in who wins here this weekend.
Jimmy Cabrera (AKT Racing / Kosmic Kart) has improved immensely from the first two rounds, placing third, followed by point leader, AJ Myers. Rory Van Der Steur (Team Felon / Tony Kart)  got himself into the top five just ahead of Danny Formal, who sits just seven points behind Myers in the championship.

Diego Ramos (HR Motorsports / Kosmic Kart) put an end to the winning streak of Christian Brooks (Orsolon Racing / Tony Kart) by posting pole in the Senior ROK division with a time of 37.099. Through two rounds, Brooks had finished first in every scored session, until qualifying in fifth Friday afternoon.
Eduardo Barrichello (NF Sports / OTK) placed second ahead of Arthur Leist (PSL Karting / Birel ART), making it Brazilian sweep of the top three grid markers. Nicholas Hornbostel (REM / Kosmic) continues his solid winter season with a time that put the Canadian fourth and just ahead of Brooks.

It was a noteworthy qualifying session for Supertune USA in Mini ROK, claiming the top three positions in the ultra-competitive category. Kai Sorenson (Supertune USA / Tony Kart) has picked up right where he left off in Miami, at the top of the charts in Mini ROK qualifying, posting a time of 40.647. Teammates Jorge Ortiz and Anderson Leonard trailed by one-tenth of a second in second and third.
Carlos Hernandez (AM Engines / Exprit) had his best effort of this Winter Tour, placing fourth, ahead of rookie driver Caleb Gafrarar (PSL Karting / Birel ART)

In one of the closest qualifying sessions of the day, Peter Licciardi (Team Midway / FA Kart) led Jordon Musser (PSL Karting / Birle ART) by .030 after posting a time of 36.776. Musser has made his return to ROK Shifter racing after picking up the win at the Las Vegas ROK The Rio event last October and has already made his presence felt. Point leader Luis Schiavo (Goodwood Karting / Kosmic Kart) slotted in third ahead of championship rival and first round winner Victor Jimenez. Hernando Sanchez (Goodwood Kartways / Formula K) joined his teammate Schiavo inside the top five as well.

Series frontrunner, Chloe Chambers (MDR / Kosmic), has picked up the pole and a crucial five bonus points in 100cc Junior with a time of 39.200. With the bonus, the New Yorker now unofficially has taken the lead over Santiago Biagi (AM Engines / Exprit) as they head into heat racing on Saturday. Connor Zilisch has returned to FWT action after a rib injury sidelined the young North Carolina driver for the past couple months. Zilisch slotted in behind Chambers and ahead of Adam Maxwell (Top Kart USA) for second position. Kyffin Simpson (Speed Concepts / Tony Kart) qualified in the fourth spot ahead of Biagi.

Many new faces are on site in the L206 category, led by Hunter Fox (MGM / Margay) and Amundsen Dylan (DP Racing / MGM) in first and second and the only two drivers to get under 43-seconds. Zachary Linsell (MGM / MGM) returns from round one to qualify in the third position ahead of point leader Jordan Prior (Prime Powerteam / Birel ART). Darry Timmers (Professional Racing / Intrepid) wrapped up the top five.