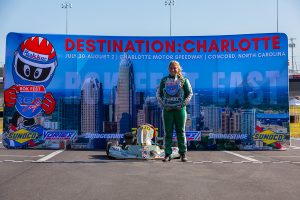 It was the final on track day for the ROK Cup USA ROK Fest East event as Charlotte Motor Speedway played a gracious host for the event weekend. With the first trip for the ROK program to the famed facility, the ultra-fast layout provided for some great wheel-to-wheel competition. The final checkered flag fell before the noon hour, as teams and competitors were able to get on the road early and head home in the driver and team friendly schedule. 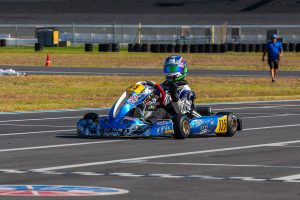 100cc Junior / Senior
Thomas Annunziata (Team Ferris / Team Felon) ran away with the 100cc Junior main event to cap off a perfect weekend of competition. Claiming the pole position, four heat race wins and main event victory, the #805 also secured the fastest lap of the race to stand atop the podium. Adam Brickley (Team Fullerton) was the best of the rest crossing the stripe in the second position but a distant 6.864 in arrears. Beckham Jacir (JC Karting) and Logan Vajda had a spirited battle for the third and final step until the halfway mark when Jacir took control and pulled away from his competitor. Brooke Nachtmann (Scuzzi Squadre Corse) took the win in 100cc Senior while finishing fourth on track with Vajda crossing the line in fifth. 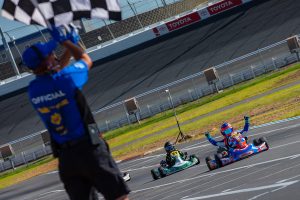 Micro ROK
Isaac Malcuit (AKT Racing) took the lead of the Micro ROK final main event at the drop of the green flag and was able to hold Asher Ochstein (Team Benik) at bay for the first four circuits. Ochstein took the lead on lap five as the front three were separated by only half a second at the conclusion of lap seven. As the front three drew away from the rest of the field, Ochstein and Malcuit were joined Keelan Harvick (Nitro Kart) as the trio would battle for the win, as at the end of lap thirteen, the gap from first to third had shrunk to .274. Holding his competitors at bay, Ochstein took the checkered flag by .569 over Harvick who moved forward two positions to stand on the podium in second. Main event pole sitter Malcuit fell to third while Max Cristea (DCT) and Matteo Franco-Ruggiero (JC Karting) rounded out the top-five. 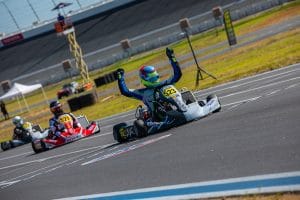 Shifter Master ROK
Nathan Stewart (Full Gas Motorsports) took the lead at the drop of the green flag and was the driver to beat. Leading the first twenty laps, Kyle Apuzzo (GFC) made his move on the second to last lap and worked his way to the point. Biding his time to move to the front, Apuzzo scored the win by .323 with Stewart finishing second. Michael Rivera (Rivera Racing) moved forward from his fifth place starting spot to finish on the podium in third putting a pair of GFC chassis in first and third. Rod Clinard (CRG Nordam) secured a top-five result in fourth while Daniel Dibos (ANSA Motorsports) rounded out the top-five. Kyle Apuzzo scored the fastest lap of the race.

Senior ROK
Liam Letzsch (Christian Bird Motorsports) did not have the first few laps of the ROK Senior final that he was hoping for as the pole sitter would find himself in sixth at the end of lap three after Thomas Nepveu (PSL Karting) moved his way to the point. Axel Cabrera (AKT) and Gunna Bischoff (OTK) were the biggest movers early on as they gained three and four spots respectively to sit second and third on track. Opening a gap of 2.2 seconds by the conclusion of lap ten, the Canadian Nepveu went on to take the win ahead of Cabrera and Letzsch, who recovered for third. Bischoff had a net gain of three positions to end his ROK Fest East event with a fourth-place finish while Justin White (Kartworkz) was able to slot himself into the fifth position. Logan Cozzie (Timmy Tech) went on to claim the Masters ROK title. 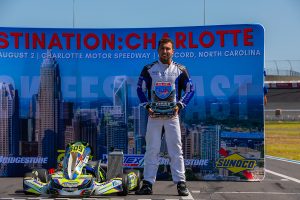 Junior ROK
Westin Workman (Timmy Tech) charged forward from his third place starting position to move to the point on the opening lap only to be pushed back to second by Jeremy Fletcher (Team Benik) on lap two. Workman moved his way back to the point on lap three and brough three drivers with him including 100cc Junior winner Thomas Annunziata (Team Ferris / Team Felon), Frankie Iadevaia (Rivera Racing) and Deanna Hoffman (Christian Bird Motorsports), who all got around Fletcher. Falling back to fifth, Fletcher put together a string of some fast and consistent race laps running nearly three tenths of a lap faster than the leader on each and every circuit. Workman continued to lead at the halfway point as Fletcher moved his way from fifth to third as he continued to chase down the leaders. Moving to second with seven laps remaining that was as far as the Team Benik driver could go as Workman took the win ahead of Fletcher and Annunziata with Iadevaia and Hoffman fourth and fifth. 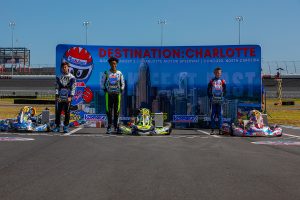 Mini ROK
Caleb Gafrarar (PSL Karting) would lead the field to green for the Mini ROK main event as he, Sebastian Wheldon (JC Karting), Salim Hanna (Team Montoya) and Parker Delong (Ruthless Karting) quickly opened a gap on the rest of the field. Kai Johnson (AKT) was making quick work from his ninth place starting position gaining four positions in the first three laps to give himself a shot at a top-five finish. Delong moved to third on the fourth lap scoring the fastest lap of the race at that point in time as he continued to chase the front duo and moved to second on lap eight. As the fastest driver on the track, Delong took the lead at the hallway mark but Gafrarar and Wheldon would not let him get away. Wheldon moved to the lead on lap twelve bringing Gafrarar with him, pushing Delong to third as the trio of drivers ran nose to tail. Delong worked his way back to the lead with two laps remaining driving to a .629 victory with Gafrarar in second and Wheldon in third. Hanna would hold on to fourth while Johnson would end his ROK Fest East event in fifth.

Shifter ROK
Andrew Bujdoso (Magik Kart USA) took the lead of the ROK Shifter final as Jake French (PSL Karting) slotted himself into the second position. Daniel Formal (ANSA Motorsports) rocketed forward three positions to third at the close of the first lap getting by Vincenzo Sarracino (PSL Karting) and Michael Stevens (PSL Karting). Sarracino was able to work his way by Formal just before the halfway mark moving into third as Bujdoso stretched his lead to nearly one second over French. Rory Van-Der-Steur (Magik Kart USA) moved to fifth on the thirteenth circuit as Bujdoso continued to stretch his lead. The Magik Kart USA driver never looked back and went on to score the ROK Fest East championship ahead of French and Sarracino. Ethan Ho (APM Racing) advanced forward four positions to finish fourth while Van-Der-Steur closed his day in fifth.

With the ROK Fest East event now in the books, ROK Cup USA competitors will shift their focus to the ROK Fest West race at Sonoma Raceway in September. Stay tuned to the ROK Cup USA website and social media pages for news, information and upcoming announcements.