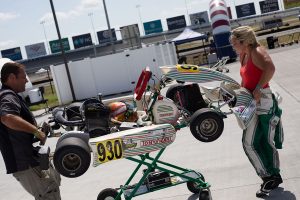 Another hot and humid day greeted ROKKERs at the Charlotte Motor Speedway as a full day of competition would see competitors have a single warmup session followed by three heat races. With combined results setting the grid for Sunday’s main events, Saturday was about survival as well as results to best set yourself up on Sunday.

Annunziata continued his winning ways garnering the heat three win taking a commanding win by 5.191 over Brickley and 100cc Senior competitor Nachtmann. Jacir was classified in the fourth position while Vajda ended his heat three in fifth.

There isn’t much the field of 100cc drivers can do with Annunziata’s speed as he chalked up another heat race win in heat four with another fast lap. Brickley maintained his second place starting position to finish P2 while Jacir advanced forward to finish third. Nachtmann was able to end her day in fourth with Vajda in fifth.

Max Cristea knocked Malcuit off the top spot with the heat three win as he and Asher Ochstein each moved forward two positions to take the top two spots. Malcuit was able to salvage a third-place result as the front three finished within .366 of one another. Matteo Franco-Ruggiero positioned himself in fifth as Maxwell Macha (RS Kart USA) moved into the top-five finishing fifth.

Asher Ochstein put his name at the top of the Micro ROK field in heat four climbing two positions from the drop of the green flag to take the checkered flag by a scant .234. Malcuit was able to slot himself into the second position while Cristea fell two spots to finish third. Harvick climbed two positions to finish fourth while Franco-Ruggiero finished fifth. 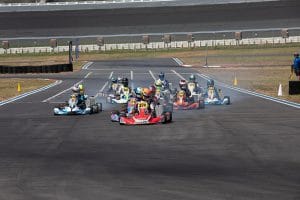 Shifter Master ROK
Kyle Apuzzo (GFC) drove to the front of the Shifter Master ROK field getting around Nathan Stewart (Full Gas Motorsports) and drove to a 1.553 win. Daniel Dibos (Ansa Motorsports) finished half a second behind Stewart to finish third in heat two while Michael Rivera (Rivera Racing) slotted himself into the fourth position. Morne Van-Taak (VTM Motorsports) found his way to the top-five to finish fifth.

Dibos had a terrible start when the green flag flew in heat three falling from third to seventh before making it to the first corner, but Apuzzo and Stewart maintained their position at the front of the field. Stewart held the point from the opening lap to take a tight victory of .078 over Apuzzo as Rivera was able to work his way back to P3. Rod Clinard (CRG Nordam) jumped two positions to fourth as Matt Machiko (Timmy Tech) did the same to finish fifth.

Stewart was able to maintain the lead for the first five circuits before Apuzzo worked his way to the point on the sixth circuit. Stewart fell back to the second position while Clinard worked his way forward to finish third. Matt Machiko moved forward from fifth to fourth while Dibos did the same moving from sixth to fifth.

Letzsch went on to take the heat three win to score the hat trick as he outpaced Nepveu, who was able to secure a second-place finish. Female standout Chloe Chambers worked her way forward to finish third as Axel Cabrera (AKT / DKM) had a spirited drive forward gaining nine positions to cross the line in fourth. Jenson Altzman scored one of the fastest laps of the heat to end his third wheel-to-wheel action of the weekend in fifth.

Letzsch made it three-for-three on the day and four-for-four on the weekend in ROK Senior while Cabrera continued his march forward to finish second after starting fourth. Altzman moved forward another two positions to finish third while White finished fourth after starting 12th. Nepveu struggled in heat four falling to fifth as he will look to challenge for the win tomorrow. 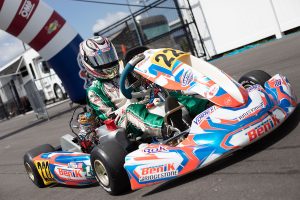 Fletcher added another heat race win to his resume topping the charts in heat three ahead of Annunziata as the top two drivers remained unchanged. Iadevaia was able to move forward one position to finish third putting his GFC machine on the inside of row for the start of heat four. Hoffman and Jacob Gerke (AKT Racing) rounded out the top-five.

Fletcher took the point at the drop of the green flag and pushed his way through the twelve-lap heat race to add another win to his daily total. Workman advanced forward three positions to cross the line in second with Iadevaia maintaining his position in third. Annunziata started heat four off pole but fell two positions to fourth with Hoffman going across the line in fifth.

Mini ROK
Caleb Gafrarar (PSL Karting) made a last lap pass on Sebastian Wheldon (JC Karting) to take the win in the second of four Mini ROK heats while Salim Hanna (Team Montoya) was third. Salvador Dellavechia (AM Engines) and Christian Cameron (Supertune) each gained seven positions to finish fourth and fifth respectively and will maintain those positions for the start of heat three.

Wheldon put his JC Karting Tony Kart at the top of the results sheet in Mini ROK heat three as polesitter Gafrarar fell one spot on the final circuit to finish second. Cameron continued his march forward gaining another two positions to cross the line in third as Hanna was fourth. Parker Delong (Ruthless Karting) was a driver on the move and advanced forward six positions to garner a top-five result in fifth.

Gafrarar returned to the top step of the podium in heat four as he and Wheldon had another battle royale for the win. Hanna was able to cross the line in the third position as Delong and Cameron maintained their starting positions to finish fourth and fifth. 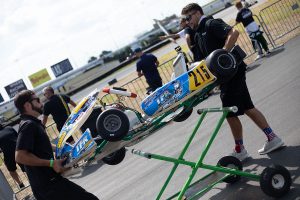 Bujdoso made it two-for-two on the day to take the third heat race of the weekend as Vincenzo Sarracino (PSL Karting) gained four positions to move up to second and take the fastest lap of the race. Jake French lost one position to finish third while Stevens was fourth. Ethan Ho (AMP Racing) made his first appearance to the top-five with a fifth-place result.

Bujdoso added another heat race win on the day taking the top spot by .542 over French, who advanced forward to finish second. Sarracino crossed the line in P3 while Stevens and Ho maintained their starting positions to finish fourth and fifth.

Sunday all teams and drivers will see a morning warmup before the ROK Fest East main events.