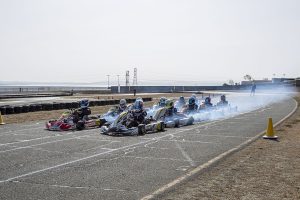 It was a jam-packed Saturday with twenty-four progressive style heat races as drivers accumulated points towards their main event grid positions on Sunday. With another picture-perfect day, ROKKERS were greeted with sunshine and warm temperatures as the on-track action also ticked up a notch. With every lap, every position, and every heat race important towards Championship Sunday’s grid spots, good, hard, and clean racing was the story of the day as another day was complete without any red flag conditions.

Junior 100cc
Courtesy of his heat one victory yesterday, Jacob Hoover (Alex Keyes Racing) would line up on the inside of the front row for heat two and drive to a flag-to-flag victory. Chase Hand (Joey Hand Racing) maintained his front row starting spot for heat three with a second-place result while Christian Cameron (Cameron Karting) crossed the stripe in third, gaining two positions throughout the twelve-lap heat. Leading Edge Motorsports driver Stephen Eisert had a good battle for the third position but finished fourth while Jack Schrady (Nevada Kartsport) lost the most positions falling from third to fifth.

Hoover made a late race pass to take the third heat race win as he beat Hand to the line by .126. Graham Trammel (Rolison Performance Group) gained seven positions to climb up the charts to finish third while Eisert remained consistent in fourth. Alex Rantala (Cameron Karting) gained three positions to finish fifth.

Chase Hand dethroned Hoover in the fourth and final heat to take the win as Hoover crossed the line in second. Graham Trammel held on to his third place starting position to finish third yet again while Stephen Eisert and Alex Rantala rounded out the top-five.

Avansino ran into trouble in heat three opening the door for Brienza, who scored his first heat race win of the day. Kyriakos Sioukas (Alex Keyes Racing) jumped four spots to finish second while Michoff gained two spots to put himself back in P3. Nolan Allison (Rolison Performance Group) and Christopher Martin (Allison) drove to fourth and fifth place finishes. Following the heat, Sioukas was given an avoidable contact penalty and pushed down to P5. 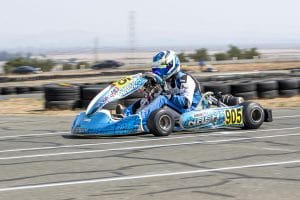 Michoff was the third different Senior 100cc winner of the day as he was able to work his way by Brienza to take the heat four victory. Brienza held on to the second position ahead of Nolan Allison while Sioukas clawed back to fourth from his heat three penalty. Christopher Martin lost one position to finish fifth.

Master 100cc
Carlos Calderon (Aluminos) took his second heat race win of the weekend as he and Billy Cleavelin (Rolison Performance Group) had another battle for the top spot. Pat Beckley (SpeedSense Motorsports) held onto the third position while Brett Harrelson (Nash Motorsportz) and Stephan Gaudreau (Aluminos) rounded out the top-five.

Calderon made it three for three in the heat races taking another race win by a huge gap of nearly four seconds. Cleavelin was again the best of the rest in second while Beckley, Harrelson and Gaudreau rounded out the top-five as they remained unchanged from the heat two finishing results.

It was a static heat race four for the 100cc Masters competitors as the top-five drivers remained unchanged from the heat three results. Calderon would again score the win ahead of Cleavelin and Beckley. Harrelson crossed the line in the fourth position and Gaudreau was able to come home in P5.

Andruss continued his perfect weekend taking the third Micro ROK heat race win as he edged Budelli by .640. Hodge was able to secure the third position while Calderon was fourth. Shobert was once again your Mini ROK heat race winner.

It was all Andruss in the Micro ROK class as he was able to take his fourth heat race win of the weekend and pole position for the main event on Sunday. Hodge advanced forward one position to finish second while Calderon did the same to finish third. Budelli had trouble leaving the grid and was late for the start retiring after only two laps completed. Shobert topped the Mini ROK results sheets. 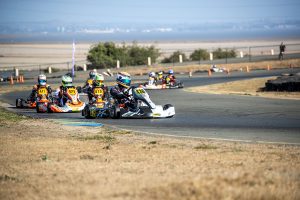 Shifter Master ROK
It was the Kevin Woods (Ron White Racing) show in the second Shifter Master ROK heat as a fast lap of 49.290 netted him a 5.196 victory over his closest rival. Neil Joseph (Cameron Karting) managed to hold on to the second position while Ryan Yop (TK America), Nathan Stewart (Full Gaz Motorsports) and Nick Firestone (GFC) all each gained one position to finish third through fifth.

Woods was another driver that made it two-for-two on the day as he put his CRG at the front of the field for the second time today. The top-five from heat two remained the same in heat three with Joseph, Yop, Stewart and Firestone finishing second through fifth. Michael Guash (Phenom) gained eight positions to finish sixth.

It was Joseph that jumped out to the Shifter Master ROK lead early in heat four and managed to hold off the advances of pole sitter Woods to take the win. Patrick O’Neill (Ron White Racing) jumped four positions from seventh to third while Yop and Stewart each fell one spot to finish fourth and fifth respectively.

Norberg was the best of the ROK Senior field again in heat two driving to a commanding win yet again. Rolison Performance Group again put four drivers in the top-five with Denmark-Gessel in second, Portz in fourth and Michael Michoff in fifth. Calvo was able to maintain his P3 starting position to finish third.

Norberg continued to flex his muscles in heat four scoring another ROK Senior win with Michoff moving from fifth to second before the final checkered flag flew. Denmark-Gessel fell one spot to third en route to the fastest lap of the race while Portz maintained his starting position to finish fourth. Calvo jumped to P2 early but lacked the pace to keep with the Rolison Performance Group quartet in front.

Cleavelin scored his second heat race win of the day gapping the rest of the Masters field by 4.279. Gaspar crossed the line in second as Wallace held on to the third position. Tracy finished fourth while Arul Venkatesh (Cameron Karting) gained three positions to finish fifth. 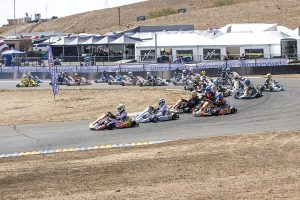 Setting fast lap after fast lap throughout the fourth heat,Cleavelin added another heat race win to his resume taking the top spot by 9.004 over Wallace and Morte, who gained four positions to finish third. Tracy was able to salvage a fourth-place result after starting third while Venkatesh finished fifth.

Pickett reigned supreme in ROK Shifter heat three taking the checkers by 1.272 over pole sitter White as the top two swapped positions in the twelve-lap heat race. Le Duc and Sciuto maintained their third and fourth place starting positions to finish P3 and P4 while Brenden Ruzbarsky (GRC) rounded out the top-five.

The top-five Shifter ROK drivers in heat four would pull away from the rest of the field as they engaged in one of the best battles of the weekend so far. Pickett led early as White fell to third on the start. Advancing to second on lap six, White was slightly faster than Pickett through mid-race. Le Duc made a move on White on lap nine slowing their momentum allowing Pickett to open a small gap that was enough to hang on to the win. Le Duc would cross the line in second as White fell to third. Sciuto finished fourth, matching his heat three result while Rubarsky ended his day with a fifth-place result.

Sunday all teams and drivers will see a morning warmup before the ROK Fest West main events in a split class schedule.