Junior 100cc
On the strength of his pole position and three heat race wins, Alex Keyes Racing driver Jacob Hoover had the luxury of starting from the pole position for the ROK Fest West 100cc main event. With an ongoing weekend battle between him and Chase Hand (Joey Hand Racing), the battle was set to continue in the main event fight but a poor start by Hand saw him fall back to fourth. Looking to work his way forward, Hand managed to move back into second by the conclusion of lap three but by then the gap was too much. 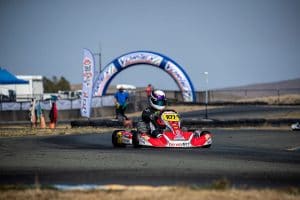 Hoover continued to turn fast lap after fast lap to stretch the lead to over two seconds by the end of lap seven as Graham Trammel (Rolison Performance Group), Stephen Eisert (Leading Edge Motorsports), Jack Schrady (Nevada Kartsport) and Christian Cameron (Cameron Karting) engaged in an intense battle for the final step of the podium. By lap twelve, Trammel was able to draw away from the trio behind him by more than one second as Cameron gained another position to fourth.

Hoover continued to dominate lap after lap and drove to the race win in the twenty-two-lap main event as Chase Hand managed to secure the second step of the podium. Trammel joined Hoover and Hand on the podium in the third position while Cameron made a late race charge and though he was the biggest mover of the race, narrowly missed the podium to finish fourth. Eisert held on to finish fifth as Schrady crossed the line in sixth.

Senior 100cc
Joey Brienza (Nash Motorsportz) began his quest for the ROK Fest West Championship from the pole position on Sunday and jumped out to the lead when the green flag flew. Kyriakos Sioukas (Alex Keyes Racing) took advantage of the inside front row starting spot to move into second as a seven-kart train led the field. Oliver Calvo (Leading Edge Motorsports) advanced four positions by the end of lap three but looking to make a move into second, spun under braking and dropped to the tail of the field.

Separating the lead pack, Brienza, Sioukas, Jenson Altzman (Rutheless Karting) and Michael Michoff (Rolison Performance Group) opened a nearly two second gap on the fifth-place driver of Will Delia (GFC). Altzman moved to the point at the beginning of lap eight as he and Sioukas moved around Brienza in the turn one braking zone as the front four remained bumper-to-bumper. Sioukas moved to the lead at the start of lap fifteen as the racing began to get defensive. Michoff took advantage of his momentum to swing by into the second position as he looked to challenge for the win. Sioukas and Michoff drew away from the third and fourth place drivers of Brienza and Altzman as Michoff moved back to the lead on lap seventeen. 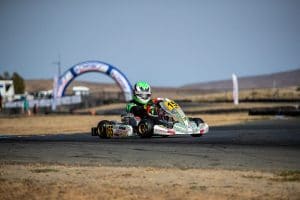 In a last lap for the ages, Michoff led but a defensive move cost him the point on the exit of the second last corner as Sioukas drove around the outside. Michoff never gave up and received help from the third-place driver getting back up to speed and lunging down the inside of the final corner. Wheel-to-wheel and a little dust on the exit, no harm and no foul as Michoff was able to get back by for the lead to take the win. Sioukas drove to a second-place finish as Brienza crossed the line in third. Altzman led early but was forced to settle for fourth while Jace Denmark-Gessel gained nine positions to end the race in fifth.

Following post-race technical inspection, Michael Michoff was removed from the results due to improper use of one of his four race tires elevating Kyriakos Sioukas to the race win.

Master 100cc
Carlos Calderon (Aluminos) jumped to the lead early in the Master 100cc class as he used the advantage of his pole position to take the point. Billy Cleavelin (Rolison Performance Group) maintained his starting position to slot into P2 as the front two pulled away from the field turning laps nearly seven tenths faster than the rest of the field.

Opening a three second gap on the third-place driver by the end of lap six, Cleavelin made a bid for the lead at the start of lap seven, only to be passed back in turn nine on the same circuit. Pat Beckley (SpeedSense Motorsports) ran a comfortable third as Brett Harrelson (Nash Motorsportz) settled into the fourth position.

Cleavelin moved back to the point on lap eighteen as it was a two-kart battle for the win. Calderon was back to the front one lap later and that proved to be the move for the win. Cleavelin dropped a wheel on the second to last lap allowing Calderon to open a 1.6 second lead and drive to the win. With Calderon taking the checkers and Cleavelin finishing second, Beckley would join them in the podium celebrations crossing the line in third while Harrelson and Stephan Gaudreau (Aluminos) was able to come home fifth. 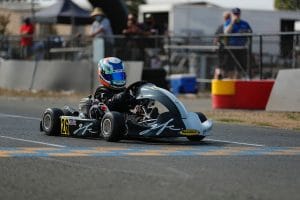 Micro and Mini ROK
Looking to keep his perfect weekend intact, Cypress Andruss (GFC) moved to the front of the Micro ROK field of drivers entering turn one as he and Brody Budelli (Leading Edge Motorsports) were the class of the field opening a gap on the rest. Cason Hodge (SpeedSense Motorsports) solidified his position in third as Mateo Calderon (Aluminos) ran in fourth.

By lap five Andruss had begun to open a gap on Budelli, inching away lap after lap to increase his gap throughout the sixteen-lap final and by the end of lap ten, he was just over two seconds ahead of his competition.

Andruss secured his first ROK Fest West Championship and free entry to the ROK the RIO event in Las Vegas as Budelli held on to second. Hodge secured the third and final step on the podium as Calderon came home fourth. Greyson Shobert is your ROK Fest West Mini ROK Champion. 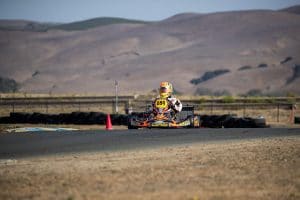 Woods opened a more than three second gap on his teammate by the end of lap eight as the front six drivers were evenly spaced throughout. With no changes through the top-five, it was six different chassis brands in the top seven as CRG, Tony Kart, FK Kart, Aluminos, GFC and Sodi Kart were all represented. By lap fourteen, Joseph and Firestone had worked their way back forward to sixth and seventh respectively as Woods continued to open the gap on the rest of the field.

Woods drove uncontested to the win to claim the Shifter Master ROK Fest West Championship as Patrick O’Neill made it a Ron White Racing one – two finish. Ryan Yop crossed the line in third and joined Woods and O’Neill on the podium with Michael Guash and Neil Joseph completing the top-five. 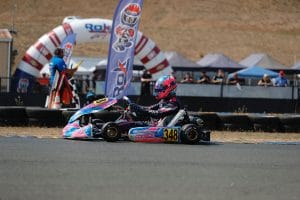 With the four RPG drivers holding down the top four positions, Liam Letzsch (Christian Bird Motorsports) moved into the top-five after gaining three positions by mid-race distance. Norberg stretched his lead to nearly a second as he also secured fast lap of the race honors with his only blemish on the weekend being qualifying where he found himself in second.

Norberg went on to take the win uncontested as Denmark-Gessel crossed the line in second, Portz third and Michoff in fourth with RPG sweeping the top-four positions. Letzsch was fifth on track but a post-race penalty for contact relegated him down the order to seventh as Ryan Martin (Ron White Racing) was the benefactor earning a top-five result in fifth. 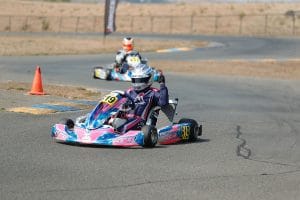 Master ROK
Billy Cleavelin (Rolison Performance Group) laid down a pair of opening laps that nobody could touch in Master ROK to open a 1.663 second lead after only two circuits. Jure Gaspar (Nevada Kartsport) made an early move to slot into second as Nick De Graff (Vemme) gained three positions to move to P3, moving to the second position only a few laps later.

Chad Wallace (Team Dirk Diggler) lost the most spots in the first five laps of competition, falling two positions but managing to hang with the lead trio. With Cleavelin opening up a two second lead early, De Graaf was on a mission consistently turning laps faster than the leader as he aimed to close the gap. Decreasing the gap to 1.5 seconds just past the halfway mark, that is as close as De Graaf got as Cleavelin drove to the win. Wallace was able to earn a third-place podium results while Gaspar and Luke Tracy (Vemme) rounded out the top-five.

Shifter ROK
It was Hunter Pickett (Pickett Racing / GFC) and Ron White (Ron White Racing) getting the jump on the field in the Shifter ROK Senior main event as the duo was able to get out ahead of the twenty-five-kart field. Pickett led early with White making his move to the point on lap three while Alan Sciuto (Alan Sciuto Racing) moved into third. Aidan O’Neill (Ron White Racing) and Cole Shade (Squadre Trackmagic / GFC) each moved forward early as Shade gained seven positions in the opening three laps to move into fifth.

White and Pickett opened a one second gap on the third-place driver as they proved to be the class of the field in the day’s main event, consistently circulating two to three tenths faster than their competitors. O’Neill made a move around Sciuto on lap eight to take over the third position while Shade was by Sciuto one lap later and into fourth. Pickett continued to stalk White lap-after-lap as the gap was never more than three tenths of a second for the first eleven laps. 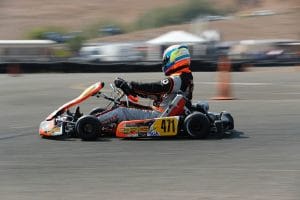 While the battle for the lead was relentless, O’Neill continued to lap slightly faster than the leaders in an attempt to close the gap. Chipping away, but running out of time, the race would come down to White and Pickett over the final five laps. Turning his fastest lap on lap twenty, White was determined to score the win, but Pickett was able to dig deep and go purple on lap twenty-one. White defended like the seasoned veteran he is on the final lap to take the win as Pickett ended his weekend with a second-place podium result. O’Neill joined the lead duo on the podium in third while Cole Shade gained eight positions to finish fourth. Nicolas Le Duc (The Karting Collective) rounded out the top-five.

With ROK Fest West now complete, only one event remains on the ROK Cup Promotions 2020 calendar. Taking place in Las Vegas, Nevada over the November 4 – 8th weekend, ROK the RIO will cap off a 2020 season. Stay tuned for news, information and future announcements coming soon.